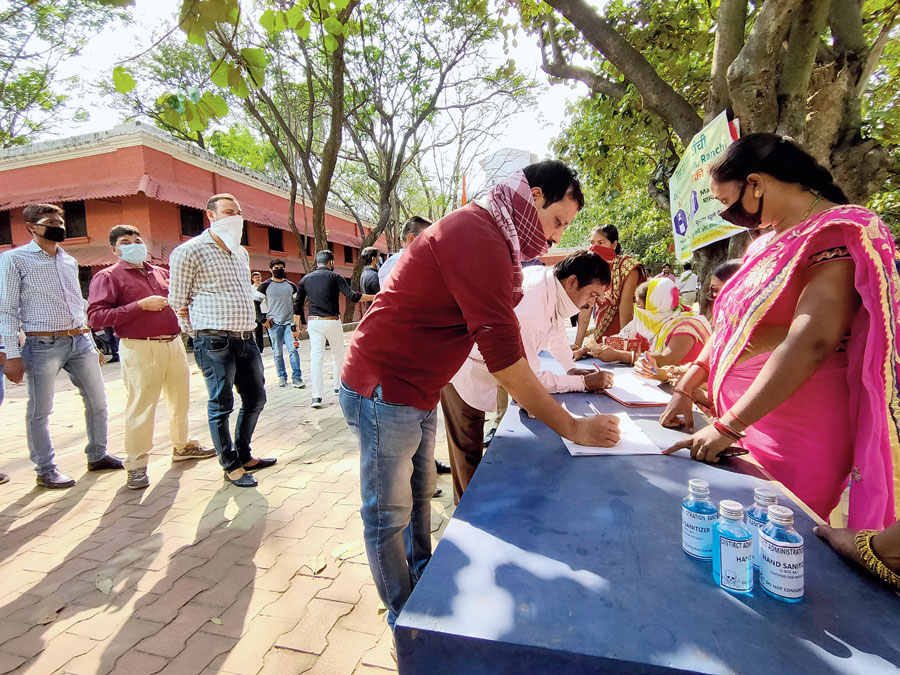 The administration on Tuesday started selling hand sanitizers to the general public from the district collectorate here in view of the novel coronavirus threat.

The sanitizer being sold at the collectorate has been locally made and certified by the chemical engineering department of BIT Mesra after proper quality control.

Available in 100ml bottles, they are priced at Rs 20 while the government has fixed Rs 100 as the maximum retail price for a 200ml bottle at medical stores.

“Over 100 people collected these bottles by 2pm today (Tuesday),” said Siddharth, who was among those managing the sales counter.

Though masks were also supposed to be sold at Rs 10 apiece there, they were not available at the sales counter on Tuesday. “It will be hopefully available from Wednesday,” said Siddharth.

The Jharkhand State Livelihood Promotion Society (JSLPS) also said in a release that they, in association with the district administrations, had started production of masks by various Sakhi Mandals or self-help groups engaged in tailoring in Palamau, Simdega, Dhanbad and Hazaribagh.

Those masks were being supplied to health workers, railway employees and other essential service providers, besides the general public, the JSLPS release said.

Production of hand sanitizer was being started in Palamau, the JSLPS added.

The Federation of Jharkhand Chamber of Commerce and Industries (FJCCI), the apex trade body of the state, also decided to make sanitizers and masks available to the public at government-approved rates.