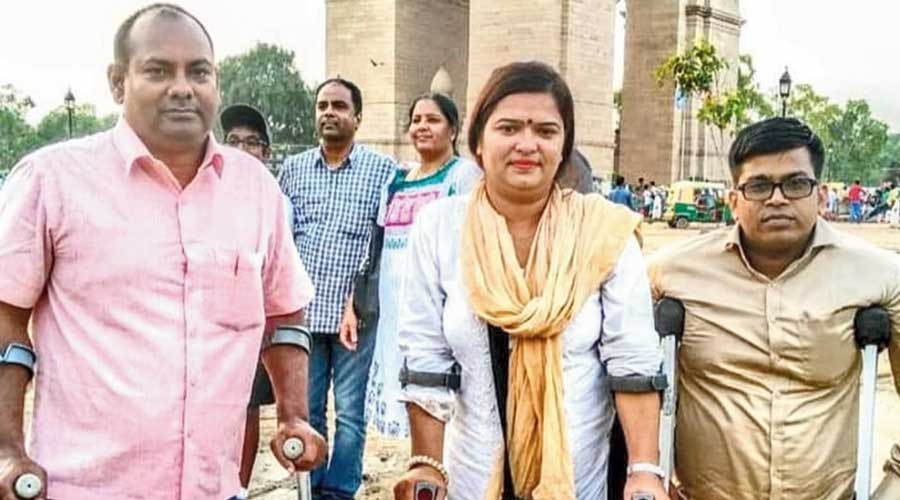 Persons with disabilities in Jharkhand and other parts of the country would launch social media campaigns and file a PIL in Delhi High Court against the Centre’s decision to exempt all posts in police and the RPF from disability quota.

Rashtriya Viklang Manch secretary Arun Kumar Singh, a resident of Jamshedpur, said all-state units of the Manch, including Jharkhand, have been asked to inform members to use their personal social media accounts (primarily Facebook and Twitter) in registering protest against the Centre’s August 18 decision.

General-secretary of the National Platform for the Rights of the Disabled V. Muralidharan said they would be registering a PIL in the high court in the first week of September.

The Social Justice Ministry issued a notification saying that Section 34 of the RPD Act, which provides for 4 per cent reservation in jobs for PwD in government establishments, would not apply to all categories of posts of IPS, the Indian Railway Protection Force Service and police forces of Delhi, Andaman and Nicobar Islands, Lakshadweep and Daman and Diu and Dadra and Nagar Haveli.

At the same time, the ministry issued another notification making a distinction between combat and non-combat roles in the security forces. The ministry exempted all combat posts in the Border Security Force, the Central Reserve Police Force, the Central Industrial Security Force, the Indo-Tibetan Border Police, the Sashastra Seema Bal and the Assam Rifles from the non-discrimination and reservation provisions of the RPD Act.

“We have units in 23 states and have an active presence in all the 24 districts of Jharkhand. We have sent copies of the Union government notification to all the members and asked them to register their protest against the Central government’s decision on social media so that a large number of people get to know about the nefarious designs of the government,” Singh said.

“Within a day or two, we will be starting a Twitter campaign against the decision and will tag the posts with the Prime Minister, Union home minister and Union defence minister.”

In June last year, more than 5,000 disabled people across the country had tweeted to Narendra Modi narrating their difficulties during the lockdown and feeling cheated after not receiving the financial assistance promised in the Gareeb Kalyan Yojana announced by Union finance minister Nirmala Sitharaman.

The campaign had been carried out under the banner of Rashtriya Viklang Manch to express dismay at not receiving an ex-gratia of Rs 1,000 in two instalments.

“Exemptions should be granted only in cases of combat roles in keeping with the intent and spirit of the provision under Section 34 of the RPD Act. It is unfortunate that a department (social justice ministry) which is supposed to safeguard the rights of the disabled and empower them  is doing just the opposite,” Muralidharan  said.

He added that the provisions of the Act did not intend to give blanket exemptions from hiring PwD, but to make sure that combat roles are not assigned to them. He said the decision was even more shocking given the fact that the Delhi Police had in October 2019 issued an advertisement for “head constable (ministerial)”, with reservations for PwD.