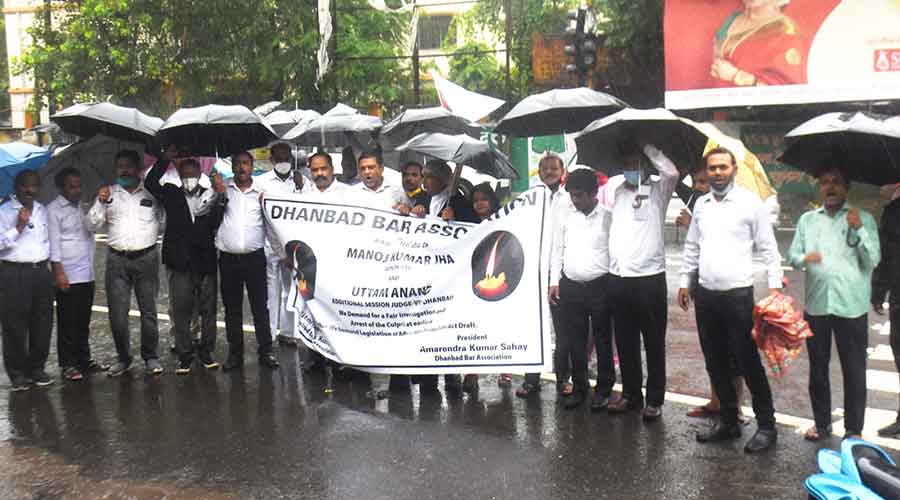 The autorickshaw used to run down Uttam Anand on Wednesday morning was stolen, investigations into the death of the Dhanbad judical officer have revealed, said sources in the SIT that has been set up to probe what the legal fraternity claims was murder constituing an attack on the judiciary.

During interactions with police officials of Dhanbad, ADG (Operations) Sanjay Anand Latkar, who is leading a state-level special investigation team to probe the death of the judge, asked them to question the owner of the autorickshaw whihc was was stolen from the Jorapokhar area.

He also asked them to scan the mobile call records of the two arrested persons, Lakhan Verma and his accomplice Rahul Verma and question the duo may have spoken to in the last 10 days. Latkar also wanted policemen to question the owner of the restaurant on Dhanbad Station Road where Lakhan, who drove the auto, had apparently dropped by for a drink on the previous night of the incident (Tuesday).

ADG (operations) Latkar reached Dhanbad from Ranchi on Friday after which he was joined by Bokaro IG Priya Dubey for a meeting with senior officials of Dhanbad police to be briefed on the findings of the probe so far. "We are reviewing the case at the moment," he said when the media pressed him for details.

Earlier on the day, Dhanbad police took the two arrested persons on five-day remand to continue interrogating them.

In the afternoon, over 50 lawyers of Dhanbad braved incessant rain since the morning to take out a march from the Dhanbad r Bar Association office to Randhir Verma Chowk to demand a thorough probe into the death of additional district judge, Uttam Anand so that the guilty are identified and punished.

The protesters were led by Amrendra Sahay, President of Dhanbad Bar Association, who abstained from work and boycotted court work also demanded immediate arrest of those involved in murder of an advocate of Tamar, Manoj Kumar Jha, about a week ago.

The agitating lawyers,  who were carrying banners and posters bearing slogans like “Dhanbad Bar Association pays tribute to Manoj Kumar Jha advocate and Uttam Anand Additional Session judge VIII of Dhanbad", "we demand a fair investigation and arrest of the culprits at the earliest", " we further demand enactment of an Advocates' Protection Act", held umbrellas in one hand as they marched on.

Talking to the media, Sahay said, “We demand immediate legislation and implementation of an Advocates' Protection Act to ensure the safety and security of lawyers who are working in adverse conditions facing attacks. Now, even a sitting judge has been attacked and killed for the first time in Dhanbad which vindicates our stand.”

“The CCTV footage indicates some conspiracy in the death of Justice Uttam Anand, who was intentionally hit by an autorickshaw and thus the case requires comprehensive investigation,” added Sahay. 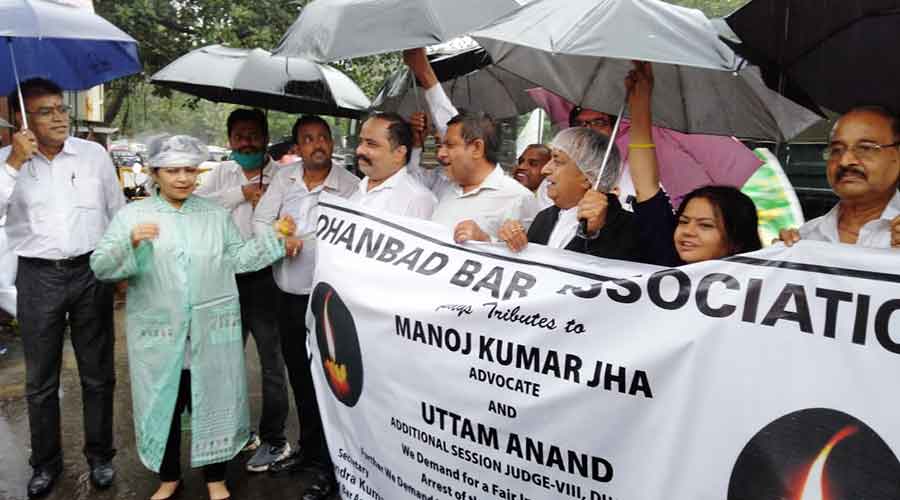