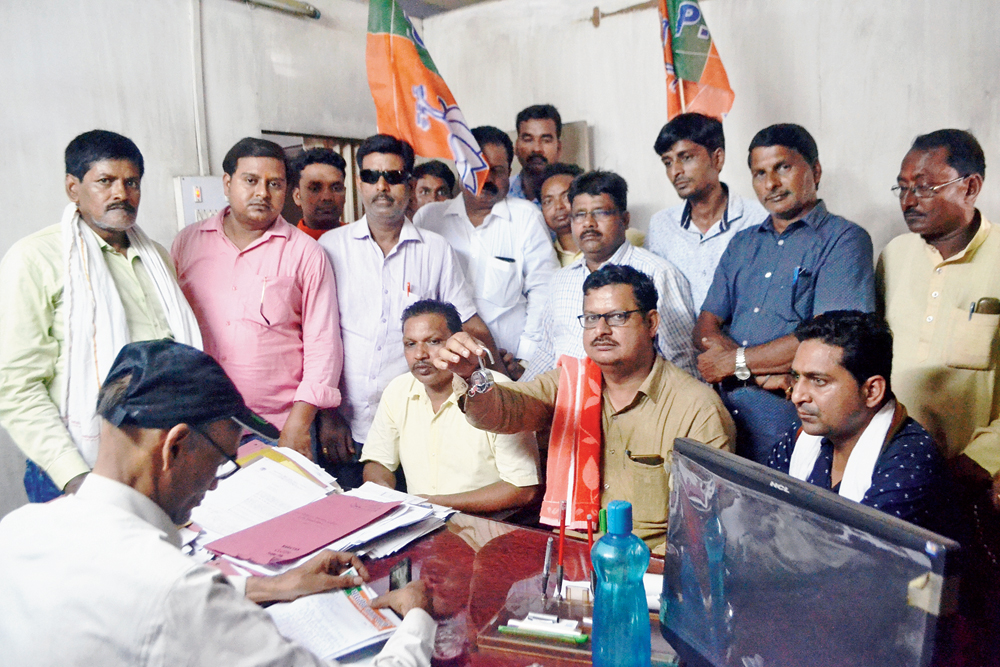 BJP supporters at the office of the JBVNL general manager-cum-chief engineer in Bistupur, Jamshedpur, on Tuesday
Picture by Animesh Sengupta
Our Correspondent   |   Jamshedpur   |   Published 18.06.19, 06:51 PM

Angry residents of Mango and Bagbera, two localities which are serviced by the state discom and which face frequent and prolonged power cuts, ran out of patience on Tuesday and laid siege to the Jharkhand Bijli Vitran Nigam’s general manager-cum-chief engineer’s office on Bistupur Main Road.

The Bagbera group switched off the main switch of the discom building to make power officials “in AC offices” feel the discomfort of “stewing in the heat” and jammed the gate so that the babus could not leave the premises. The Mango group held a demonstration outside the office, calling out JBVNL managing director Rahul Purwar’s assertion of 24-hour power supply as “only a tall claim”.

The 50-member group of Bagbera residents, which reached the discom office first, was completely unapologetic about forcing deputy general manager (DGM) S.P. Singh — general manager Arvind Kumar was in Ranchi — and other officials to sit in the heat and darkness for an hour. The protesters refused to budge till the power babus promised to get two defunct transformers repaired “immediately”.

“We have to suffer in this suffocating summer without power at home for hours at a stretch, every day, thanks to the JBVNL,” shouted Bagbera resident Devendra Singh. “We will not allow any officer to sit in his air-conditioned chamber with continuous power supply from (Tata subsidiary) Jusco.”

After an hour of sitting in the stifling heat, the DGM called in Pradip Vishwakarma, executive engineer, Jamshedpur, to the office, and instructed him to repair the transformers at Bagbera immediately. The protesters dispersed only then.

But no sooner had the Bagbera protesters left, a group of 30 people from Mango, led by local BJP leader Vikas Singh, started demonstrating in front of the discom office to protest the long power cuts — of up to eight or nine hours — in their densely populated locality.

“We suffer endlessly in the heat while JBVNL managing director Rahul Purwar claims that people across the state are getting round-the-clock power supply,” a protester shouted. “How is this possible? Everyone knows about the long power cuts in Mango.”

A delegation of the Mango protesters met DGM Singh, demanding better power supply and threatening to lock up the discom office if there was no improvement.

“We will lock up this office and send the key to your MD’s office in Ranchi,” said the BJP leader. “If the JBVNL can supply only 15 hours of power to its consumers, its MD should not boast of 24-hour power supply.”

DGM Singh said they had taken steps to repair the transformers in Bagbera. On the poor power supply in Mango, he called it a problem of “overloading only”, implying that too many consumers led to frequent outages, and that it was not the discom’s fault.

Jusco, the Tata subsidiary that supplies power to company areas, drew flak from residents of Vijaya Garden, an upmarket apartment complex at Baridih in Jamshedpur.

Residents said they had been facing frequent power cuts for the past 15 days, but on Monday night the power supply did the vanishing act for three hours at a stretch.

“It was unbearably hot last night (Monday) and children and elderly had to suffer the most,” said Rajesh Kumar, one of the residents.

Contacted, a Jusco official said the residents of Vijaya Garden were using more power than what the company supplied, and tripping was due to overloading.