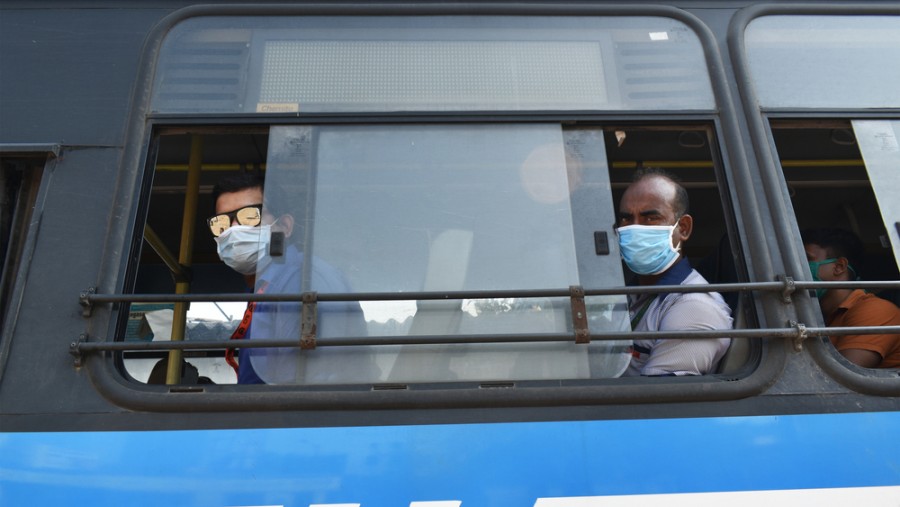 The bus had 57 passengers from various blocks in Giridih
Representational Shutterstock image
Our Bureau   |   Published 20.08.20, 11:39 PM

Giridih police on Thursday seized a bus carrying 57 passengers to Calcutta despite the travel restrictions in view of the Covid-19 pandemic.

The bus, registered in Bengal, was on its way from Rajdhanwar when police stopped it in an area under the Saria police station.

Saria subdivisional police officer Binod Mahto said: “Social distancing rules were being flouted. The passengers of the bus were residents of various blocks in Giridih. They had been charged Rs 800, double the regular fare.”

After the vehicle was seized, the passengers were sent home. The bus has been kept at the Saria police station.

Jharkhand education minister Jagarnath Mahto on Thursday opted for self-quarantine at his residence in Bhandaridah.

According to family sources, he will not meet anyone for the next four days. He has isolated himself as a precautionary step as he had attended the cabinet meeting on Tuesday in which health minister Banna Gupta also participated. Gupta tested positive for Covid-19.

JMM activists on Thursday walked in a symbolic funeral procession of Dhanbad MP P.N. Singh and BJP MLA Raj Sinha from Tata Sijua No. 6 area to Bheltand. The JMM activists charged the duo with politicising the issue of renaming Patliputra Medical College and Hospital (PMCH) and disregarding the contributions of the late Nirmal Mahto.

The state government had on August 15 renamed various medical colleges. PMCH was named after Mahto, a leader of the Jharkhand agitation. BJP leaders, on the other hand, demanded the renaming of PMCH after four-time Dhanbad MP A.K. Roy.

Altogether 28 persons were discharged on Thursday from various Covid-19 treatment centres in Dhanbad.

The discharged persons have been asked to remain in quarantine at home for 14 days and continue to follow social distancing norms.

Chatra superintendent of police Rishabh Jha and his wife tested positive for the coronavirus on Thursday. He is quarantining at his official residence.

Jha had convened a news conference on Wednesday which was attended by local journalists. The administration has started contact tracing to track the journalists who met Jha in the past few days. This is the first time a senior officer has been reported Covid-19 positive in the district.

Protest in Dhanbad over dead body

Residents of the Kustore and Kendua areas of Dhanbad on Thursday put up a roadblock for around 10 minutes to demand release of the body of the property dealer who was murdered a day earlier.

The body had been retained by the hospital because property dealer Satish Singh, who was also a BJP leader, tested positive for Covid-19.

The blockade was lifted after a team of Kenduadih police station led by officer in charge Vinod Oraon held talks with the protesters. The team convinced them that as per the norms, the dead body of a Covid-19 patient cannot be handed over to the deceased’s family members.

Five alleged members of a gang of mobile phone snatchers were arrested by Dhanbad police on Thursday. The police found 18 mobile phones on the arrested persons.

Vivek Paswan, Sriram Paswan, Vishal Pandey, Vikash Nuniyal and Deepak Singh are from Burdwan in Bengal but were operating in Dhanbad.

Deputy superintendent of police Sarita Murmu said the force arrested two of the alleged snatchers during a vehicle-checking drive at Govindpur. They divulged details of the others, who were held after a raid in the Nirsa area.

The police found the charred remains of a tablet and a cell phone from the Murku jungle. The robbers had apparently found it too dangerous to keep or sell the gadgets.

The police feel that the robbers -- Anurag, Om Prakash, Aabid Ansari and Aneekesh – had also made off with a biometric scanner belonging to N. Ansari on July 20. But they had burnt it.

They had robbed Ansari of some cash, too. The police recovered cash worth Rs 39,000, and have asked a bank to freeze a sum of Rs 30,000 deposited in Anurag’s account.

Ansari’s car, which too was taken by the robbers, had been found by the police on July 22.