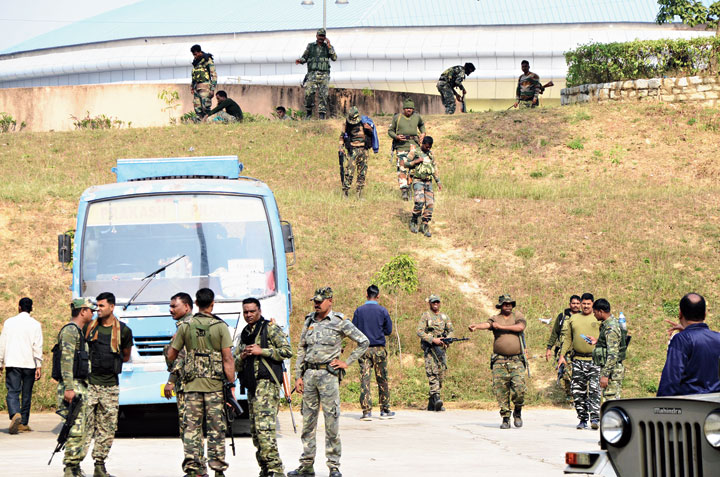 A 30-year-old constable of Chhattisgarh Armed Force (CAF), which has been pressed into service for the ongoing Assembly elections in Jharkhand, shot dead his sexagenarian commandant before killing himself at mega sport complex under Khelgaon police station on Monday morning.

Around 6.10am, Vikram Rajwade shot himself dead with his Insas rifle after gunning down Mela Ram Kurrey, an inspector-rank official, following an argument.

Kurrey, who was set to retire in January, was a resident of Raipur while Rajwade hailed from Sarguja, both in Chhattisgarh.

“The CAF personnel had put up in a building inside the sports complex, situated barely 750m from Khelgaon police station. Today (Monday) they were set to leave for Hazaribagh on election duty. All of a sudden, we heard gunshots and rushed in the direction from which they came. When we reached the spot, we found them lying in a pool of blood. Their bodies were sent to Rajendra Institute of Medical Sciences (RIMS) for post-mortem and forensic experts were called in to examine the spot. It is not immediately clear why Rajwade shot dead his commandant. A case has been lodged,” officer in-charge of Khelgaon police station Mukti Narayan Singh said.

A constable said Rajwade had fired as many as 20 bullets, many of them in the air, before killing Kurrey.

“We are part of fourth Mana Raipur battalion of the CAF that has been pressed into election duty. We returned to Ranchi in the wee hours of Monday after completing our poll duty in Chaibasa. Today morning, we were preparing for our next duty in Hazaribagh. Some of us were loading our weapons and other items in buses and trucks while others were taking bath. All of a sudden, we heard gunshots. Initially, we thought it was accidental firing, but rushed to the spot to see Rajwade firing in the air. He fired 20 bullets before killing Kurrey,” a constable said.

As senior official of the CAF said eight companies had been pressed into service for the Assembly elections in Jharkhand. One company comprises 100 cops.

“There must be some dispute between them. Rajwade was known for undisciplined behaviour. Four days back, Kurrey had lodged a written complaint against Rajwade and a few others for disobedience and consumption of alcohol on duty when they were posted at Sonua in Chaibasa. We don’t know what actually happened today (Monday) morning,” the official said. Following the shootout, the march order of the company to Hazaribagh was withheld.

New Delhi: A CRPF unit deployed for Jharkhand Assembly polls has alleged that “animal-like treatment” was meted out to its troops and they were provided water from a water cannon for drinking and cooking a PTI report said on Monday.

An assistant commandant-rank company commander of 222nd battalion of CRPF has written to the state authorities and his headquarters in Delhi how the troops, who had finished duty of the second phase of polls on December 7, were not provided any local assistance and water when they reached Ranchi on Sunday after covering 200km, including 17km on foot.

“Initially, there were some issues, but they were resolved soon,” Meena, also the coordinator for the polls, said.