He will reach Dhurwa at 11.30am and stay there for around 20 minutes 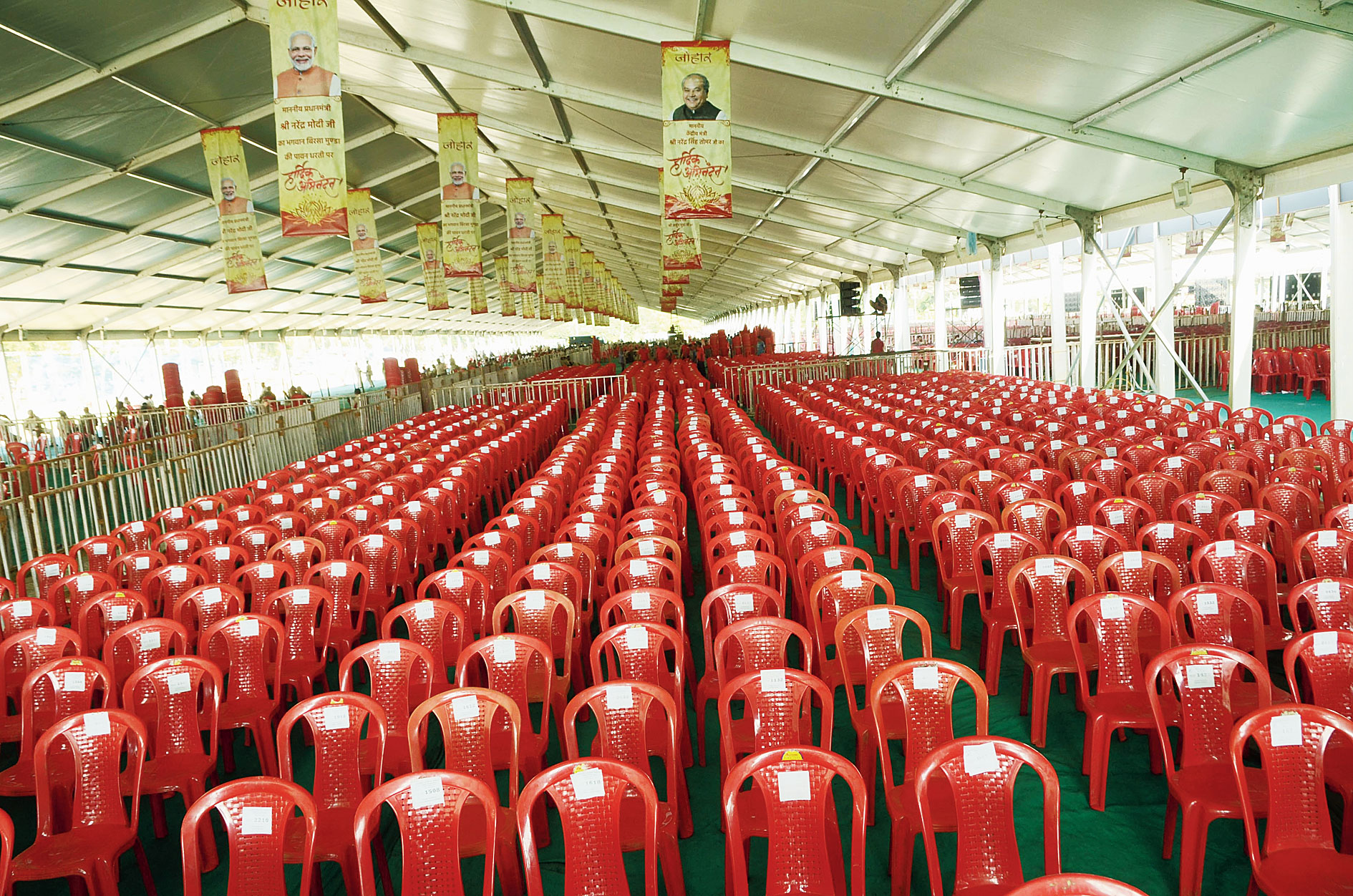 Chairs arranged on Tuesday at Prabhat Tara ground in Dhurwa, Ranchi, the venue for Thursday's inauguration of the Assembly building.
Picture by Prashant Mitra
Our Correspondent   |   Ranchi   |   Published 10.09.19, 07:10 PM

Prime Minister Narendra Modi, who will spend about two hours in the capital on Thursday, is scheduled to address a gathering of over one lakh farmers at Prabhat Tara ground here, inaugurate a number of schemes, including one on traders’ pension, and release a postal stamp on the new Jharkhand Assembly which he will also open.

According to a tentative schedule worked out by the state government on Tuesday, Modi will land at Birsa Munda Airport at 11am. At 11.20am, he will leave for the new Assembly building.

The Prime Minister will reach Dhurwa at 11.30am and stay there for around 20 minutes.

“He will unveil a plaque of the new Assembly building. Then, we will be briefed about the new building during which time a prototype, set up by officials of the building construction department, would be used. The Prime Minister will also inspect the new building,” said an official of the state government involved in the preparations.

“Thereafter, he will release the postage stamp at a brief programme that will be organized at the central hall of the new Assembly,” the official added.

Modi will leave the Assembly at 11.55am for Prabhat Tara ground where the main function will be held.

The Prime Minister, he explained, would inaugurate the Rs 290 crore multi modal terminal (MMT) set up on the banks of the Ganga in Sahebganj district as a part of the World Bank-aided Jal Marg Vikas project of the Inland Waterways Authority of India.

Chief minister Raghubar Das, who addressed the media later on Tuesday, said a two-way digital communication system would be used in Ranchi for the inauguration.

Minister of state for shipping and chemical and fertilizers Mansukh Mandaviya would be present at Sahebganj.

The Prime Minister would also lay foundation stones of a new secretariat building proposed to be built at a cost of Rs 1238.92 crore at HEC locality and 462 Eklavya model residential schools (EMRS) across the country, of which 14 would be opened in Jharkhand.

He would also launch Pradhan Mantri Kisan Maan Dhan Yojana under which farmers above 60 would get Rs 3,000 as monthly pension.

Chief minister Das said 1.09 lakh farmers of the state had already been enrolled for the pension scheme.

“The enrolment process is going on and the number will increase further,” he said.

“We have received a communiqué from the PMO to say that Modi will also launch Khudra Vyapari Dukandar Swarojgar Pension Scheme for traders. Shopkeepers between 18 and 40 can apply. They will get Rs 3,000 every month after they turn 60. We will start an enrollment drive soon. The scheme will also help women of self-help groups,” he said.

The official said the Prime Minister would be accompanied by governor Droupadi Murmu, the chief minister and Union agriculture minister Narendra Singh Tomar.

“We have decided to screen short films on the new Assembly building, the proposed secretariat, MMT, EMRS and Kisan Man Dhan Yojana,” said the official, adding that Modi would return to Delhi the same day.