From thermocol plates to plastic packets and cups and decaying edibles kicking up a stench, garbage was strewn across the playground 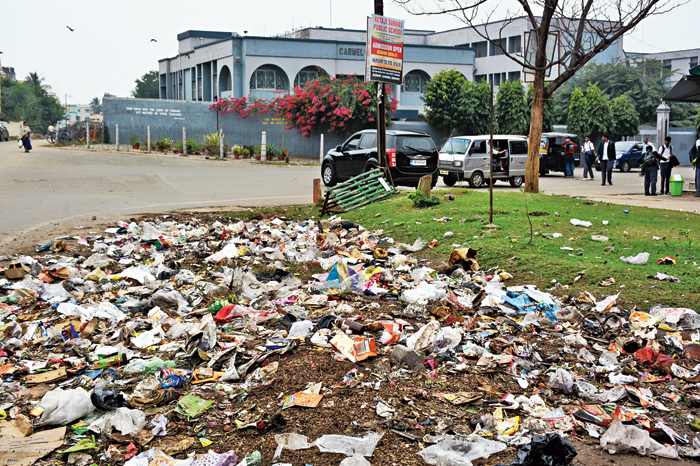 Trash, including plastic and rotting food, was found dumped at a playground in a residential area of densely populated Sonari on Tuesday, mocking the civic body’s preparedness for the annual Swachh Survekshan (sanitation survey) field verification to be held in January 2020, ahead of the central government’s pan-India Swachh rankings for cities.

From thermocol plates to plastic packets and cups and decaying edibles kicking up a stench, garbage was strewn across the playground near the Kagalnagar Colony Main Road hemmed in between Sonari Gurdwara on left and the Sonari Kabristan on the right, barely 1.5km from the aerodrome.

The upper middle-class area is dotted with multi-storey residential apartments and a preparatory school as well.

Tarun Chandra, 66, a businessman and resident of Kagalnagar Colony who stays close to the playground, said their area’s electricity and water supply were serviced by Tata Steel utilities arm Jusco but garbage cleaning and disposal was the onus of the state-owned Jamshedpur Notified Area Committee (JNAC).

“It has been months since we have seen anybody from the JNAC cleaning the playground. Matters have worsened with marriage parties being hosted on the playground. After the festivities are over, edible leftovers are dumped at various points. It is cold, but soon the food rots and the smell gets unbearable,” Chandra said.

According to conservative estimates by residents here, the area surrounding the playground has a population of over 3,000 people, mostly professionals and retired company or government employees.

Akansha Chaddha, 28, an office-goer and a resident of Kagalnagar Colony, said they were completely fed up of the trash in the playground. “We’re having December rain and you can imagine what it does to the trash. It turns mucky and smelly and a haven for mosquitoes. There is a drain all along the playground but it is clogged with solid waste being regularly dumped. Due to the stench, I feel like throwing up when I cross the road near the playground, but there’s no option as it is the only road leading to our house,” she said.

JNAC city manager looking after the Swachh Bharat Mission, Sandeep Kumar, when contacted by The Telegraph promised to look into the issue.

“We have waste collection done regularly by an outsourced agency,” he claimed. “However, I will look into this (trash dumped on the playground) and get the waste cleaned at the earliest. There must be some confusion as there is an overlapping of the areas serviced by Jusco and JNAC in Sonari. We will sort it out. Cleanliness is a priority,” he said.

Jharkhand had finished second as the best performing state, behind Chhattisgarh and ahead of Maharashtra, in the Swachh Survekshan rankings of 2019. Jamshedpur (Jamshedpur Notified Area Committee) was judged the best among civic bodies in the state with a rank of 15th in the overall ranking of all the 4,237 urban local bodies of the country.

Field verification by officials as part of Swachh Survekshan 2020 is scheduled between January 4 and 30.