'Our daughters are earning laurels everywhere, from the sea to the air, and making the nation proud. If women get educated, society gets educated' 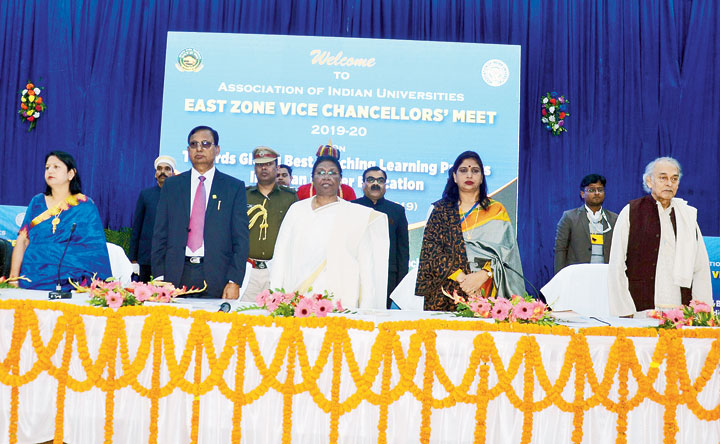 Governor Droupadi Murmu noted that out of 100 vice-chancellors at the two-day East Zone Vice-Chancellors’ Meet on best learning practices that started on Thursday at the Central University of Jharkhand campus, Brambe, 20km from here, only seven were women.

Using this observation as a take-off for women’s higher education, the governor continued: “No one should ever think what good does educating a girl do. Universities must pay attention on promoting education among women. Our daughters are earning laurels everywhere, from the sea to the air, and making the nation proud. If women get educated, society gets educated.”

Murmu spoke on developing a sense among university students to enable them to think independently, but did not mention the student protests over the Citizenship (Amendment) Act across the country.

Chairman of Educational Technology and Management Academy, Gurgaon, Marmar Mukhopadhyay, who was present as special guest, told The Telegraph after the inaugural session that he believed the best way to learn today was to keep learning. “The time of learned people is over. Now, the time is of people who keep learning, continuously upgrading themselves,” he said.

Vice-chancellor of Technical University of Jharkhand Gopal Pathak, who also spoke to The Telegraph on the sidelines of the event, stressed on improving the learning process across the country.

“Teachers should always pay attention to the actual learning of the students. After the lesson, a teacher should follow up on whether the students learned what they were taught or whether they need more support, and act accordingly. Students should be taught in such a way that they become employable anywhere,” Pathak said.

The meet will continue on Friday. Relevant points collated from the two-day event will be presented before the government.