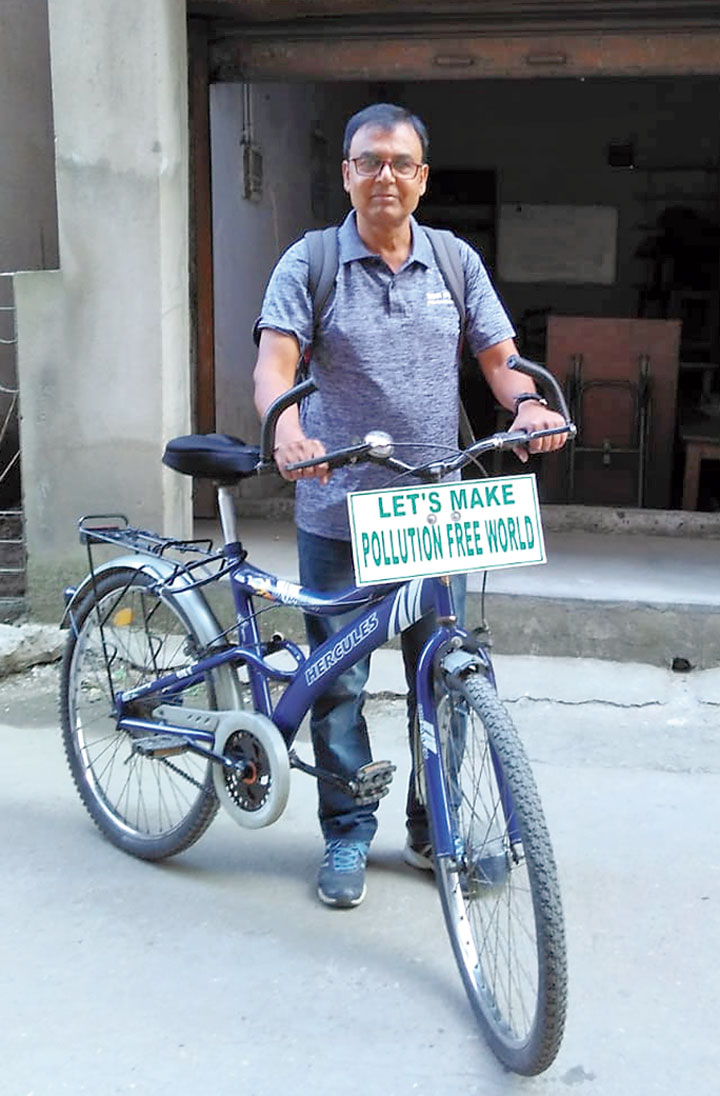 Jayant Kumar Bhuyan, known for his smart moves on the chessboard, will now create ripples on the road on his cycle on Thursday.

Fifty-six-year-old Bhuyan, a chess mentor and arbiter, will be off to Chaibasa on his bicycle to officiate in a chess tourney starting October 17.

But, it will be no ordinary ride to the West Singhbhum headquarters, around 68km from Jamshedpur, as Bhuyan will stop and tell people on the way to curb pollution.

A fitness enthusiast, the Bhuiyandih resident and an office-bearer of East Singbhum District Chess Association said his effort was aimed at making the world pollution free through bicycles.

“I feel strongly about pollution and want to do whatever I can to inspire my fellow citizens into making the planet cleaner and healthier. After all, it is our only home. The dangers of pollution harming our planet are real and frightening,” Bhuyan said while getting the wheels and brakes of his old bicycle checked by a mechanic on Tuesday morning near his Bhuiyandih home.

“I appeal to people of all ages to use bicycles to cover short distances,” he added. “Go to fitness centres or gyms or playgrounds on bicycles. This will not only help keep you fit by burning your excess calories, it will also reduce emissions and save fossil fuels,” Bhuyan added.

On Thursday, he will head off to Chaibasa from JRD Tata Sports Complex in Bistupur on Thursday 7.30am and is likely to reach his destination in about five hours.

On his trip on Tata-Chaibasa road, the bespectacled Bhuyan added: “I am all geared up for the trip. But my bicycle is about a decade old and needed some repairs. The mechanic has put the brakes in order and also greased the wheels.”

He added that he would take a light breakfast before the long cycling trip to Chaibasa.

“I am going alone, so I will also carry drinking water and a small towel. I’m going to enjoy this challenge,” Bhuyan, a well-known name in the district chess circuit for over two decades now, said. A coach at Tata Chess Centre, Bhuyan loves trekking, cycling and also visits Dalma sanctuary regularly.