Advertisement
Home / Jharkhand / Past is past, zealous Jamshedpur FC take on FC Goa on Friday

Past is past, zealous Jamshedpur FC take on FC Goa on Friday

The Indian Super League encounter is crucial for both the sides 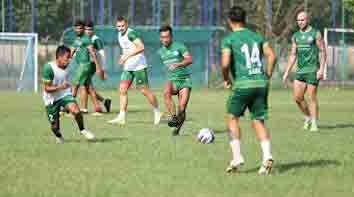 After a 1-1 draw against SC East Bengal on Sunday, Jamshedpur FC take on FC Goa in an Indian Super League (2021-22) tie at Athletic Stadium in Bambolim, Goa on Friday.

The steel town team has not been able to post a win against Goa in the last eight matches but that should not be a deterrent for Owen Coyle's men who would try their best for a turnaround. Head coach Coyle is aware that Goa are dangerous opponents and would try to make sure the best team is available. Barring one or two niggles, the team looks fit and the players would like to give their best for getting 3 points.

On the approach against FC Goa, Coyle said, "I think in terms of performance, they would not have been happy about losing the game. I think the margin is incidental whether it is 1-0 or 3-0. If you lose, you lose and they will recover from that as FC Goa is a team which has a fantastic pedigree and will look to bounce back quickly. They have good players who did really well in the previous season. Of course, there is no doubt FC Goa will look to winning the game, but whatever challenge they present, we have to be ready for that."

About being unsuccessful in winning the last eight games against the Goan side, the Scotland-born coach said he has been in football for such a long time now and the past does not affect the game that is yet to be played, which is also decided on the basis of merits.

"So whatever were the results in the past, there is no bearing on the game that is going to be played. What we have to do is make sure we are the best versions of ourselves and FC Goa have the same plan as well. They must be currently hurting after losing their first game against Mumbai City FC and it is a dangerous time to play against them. But we have to make sure we are at our very best. We’ll be very respectful of FC Goa’s quality as they are a fantastic club with great philosophy, players and an outstanding young coach. But we have to go out and simply play our game and give our best," he added.

Jamshedpur FC have  a nice blend of Indian and foreign players who have the ability of flourishing in tough situations. The likes of Nerijus Valskis, Jordan Murray, Peter Hartley, Eli Sabia, Alex Lima, Greg Stewart, Anas Edathodika and presence of youngsters like Boris Singh, Komal Thatal and Jitendra Singh thave the required firepower to upset Goa.

The Red Miners have never made the cut for the play-offs since making their debut in the cash-rich ISL. Jamshedpur finished sixth with 27 points in the season, also held in Goa.