Overflowing drains and the accompanying stink in Seraikela-Kharsawan district

Life in a stink zone 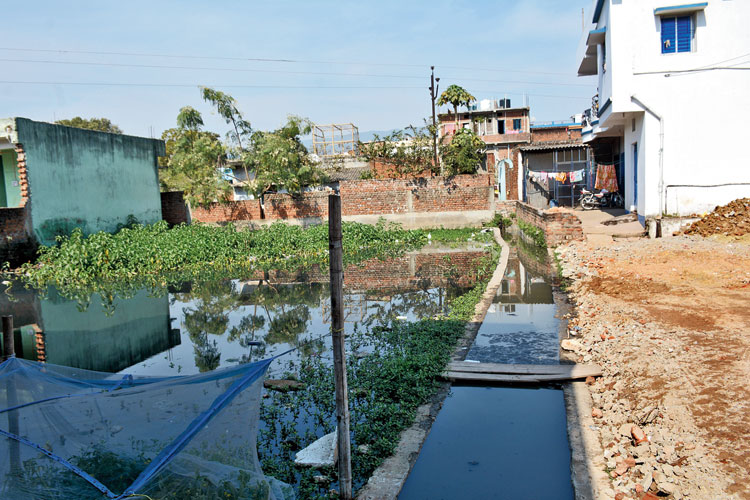 Dirty water from the drain spills on to the adjoining land at Kapali in Chandil, Seraikela-Kharsawan
Pictures by Bhola Prasad
Antara Bose   |   Jamshedpur   |   Published 26.02.20, 07:42 PM

Overflowing drains and the accompanying stink have become a way of life for residents of Kapali under Chandil subdivision of Seraikela-Kharsawan district.

The drain, which carries waste water from homes in Tamulia, Ghousnagar and nearby areas adjacent to Mango, is now spilling over, with the foul odour making life difficult for residents for the past one month.

More than 40 households are directly affected by the problem, which residents say is the result of Kapali Nagar Parishad’s failure to construct a proper drain and encroachment of land blocking the existing drain’s path.

Kaniz Fatima, a local resident, said walking in the alleys was not possible anymore without getting one’s feet soaked in the dirty water.

Residents now have to walk more to reach their homes because the roads are flooded.

“The drain, which was built around nine years ago, was never completed. Matters have been made worse by encroachment of land on which the drain has been constructed. This has blocked the drain and waste water is now flowing everywhere. The entire area has become a stink zone. People are falling sick,” Fatima said.

Another resident said a person named Mazhar Khan had blocked the drain’s path for a building.

He said the residents had collectively filed a complaint against Khan at Kapali police station earlier this month, but police took no action.

Some accused Khan of threatening anyone who had complained against him.

They fear that the drain water would enter their houses once it begins to rain.

“Plots of land owned by local people are filled with stagnant drain water. We are worried that this water will enter our homes in case there is a heavy downpour. We vote every time for a better government, but our basic amenities are not taken care of,” Asraf Ali, another resident of the area, said.

SDO Mishra confirmed having received the complaint and said he would visit the area to take necessary action.

“I have received their complaint. I will have to visit the area to see what can be done. Many a times, residents lack basic civic sense and contribute to such problems. Illegal encroachment is also a cause for concern,” Mishra added.