Advertisement
Home / Jharkhand / On the wings of a prayer in Hazaribagh

On the wings of a prayer in Hazaribagh 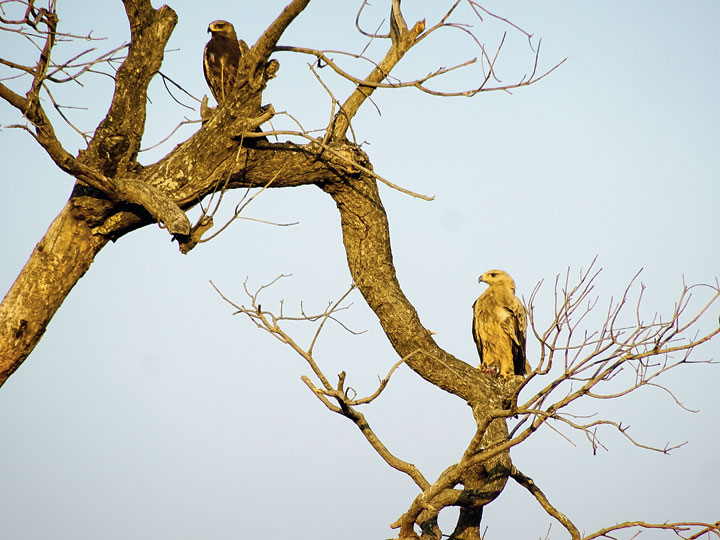 For St Xavier’s School mathematics and commerce teacher Shiv Shankar Goswami, the discovery of tawny eagles was a twin delight.

Goswami said that till 2017, the population of the bird was “satisfactory” and was in the “least-concerned” category. But suddenly in 2018 tawny eagles slipped into the “vulnerable” category of conservation status.

He said he had been for tracking tawny eagles in the area for the last three years, and that there are seven birds now in Hazaribagh.

Goswami said he had found tawny eagles at Charwa Dam and BearJuljul Pahad of Sitagarha and has been regularly following them. “There are seven birds in Hazaribagh now,” he said.

Goswami reminisced about his first encopunter with a tawny eagle.

On December 31, 2017, he was on his usual birding trip when “suddenly I noticed a huge bird over my head. I thought it was a vulture because the place where I was is frequented by vultures. Suddenly the huge bird came down on the top of a tall sal tree and I realised it was not a vulture but a raptor.”

He was, however, unable to recognise the bird species, “as I had never seen it before”.

Goswami said he went closer to the tree and took photographs and forwarded them to Ramit Singhal, programme coordinator for Bird Count India, who immediately identified it as a tawny eagle.

Goswami said it was a matter of pride for him as it was the first report of the bird being sighted in Jharkhand.

“When I came back home and started reading about the bird, I found the conservation status of the bird was ‘least concerned’. I also saw a nest of the bird on the tree. It was a twin delight,” he said.

After that it became his passion to know more about the elusive bird.

“I started visiting the place whenever I got time and came to know many things about the behaviour of the bird. I took help of the book Birds of Prey of Indian Subcontinent by Ridhad Nauroji. But the story changed in mid-2018, particularly in August 2018, when the International Union for Conservation Network (IUCN) announced the bird’s conservational status as ‘near threatened’, which means the population has decreased to a great extent,” Goswami said.

But he found that the population of the bird was increasing in Hazaribagh.

“In 2017, the bird successfully hatched two chicks and both were healthy. They grew up in front of me. In 2018, another chick was born. And this year, I have observed they have started building a nest.”

Goswami said tawny eagles are declining because of dwindling number of tall trees and lack of food.

“But Hazaribagh has the right conditions and tall trees in large numbers making it suitable for them to call it home,” he added.

It is estimated that a tawny eagle can live up to 16 years. It breeds in most of Africa, both north and south of the Sahara Desert, and across tropical southwestern Asia to India.