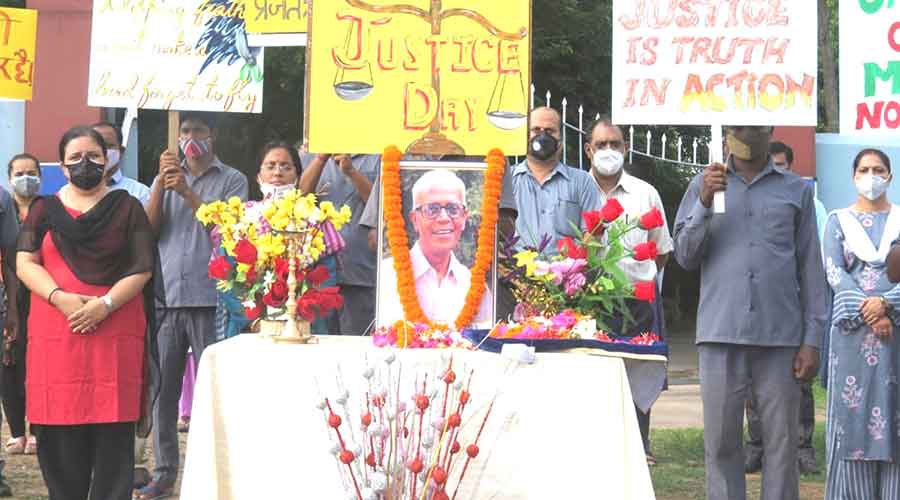 Justice is truth in action; One voice can be muffled not millions; A right delayed is a right denied; Our constitution begins with we the people and not us the government.

A host of such slogans were raised as the members of Society of Jesuits on Wednesday observed National Justice Day at De Nobili School Bhuli to pay respect to tribal rights activist, Father Stan Swamy and resolved to carry forward his legacy.

The half an hour programme held near the main gate of De Nobili School Bhuli  during the morning was part of a nationwide programme organised as per the call of Jesuit Provincial of South Asia, Jesuit Conference of India and Jesuits in Goa.

Talking to the Telegraph Online on Wednesday after the programme, Father Sebastian Puthepura, Principal of De Nobili School Bhuli said, “Only members of the school management, some teachers and a few of our support staff took part in the programme held in the morning during which we put a portrait of Fr Stan Swamy near the main gate and observed two minute silence in respect of Fr Stan Swamy.

He added that the participants of the programme were holding placards and posters bearing slogans demanding justice for Stan Swamy.

De Nobili Group of Schools situated at Digwadih, CMRI, Bhuli, Maithon, Mugma, Gomoh, Koradih, Sijua and Chandrapura are operated by the Society of Jesuits.
Talking to The Telegraph Online, Puthepura said, “Stan’s death is not an end; it is yet another moment of awakening in our journey to affirm our faith in the constitution of our country.”

“Stan has joined the company of Adivasi martyrs and all those who sacrificed their lives to protect the secular and democratic fabric of diverse cultures of our nation,” said Puthenpura.

“Stan’s death is a moment of deep consolation, as he has united people across cultures, religions and nationalities to walk bodly and courageously in path of justice to human family and creation,” further added Puthenpura.

“At this moment we profoundly acknowledge and affirm his prophetic spirit that urges us to demand justice for stand and all other accused in Bhima Koregaon case,” said a press release issued by the Jesuit conference of India released during the programme held in the school.

“Insistently we ask the central government to free the human right defenders and undertrial prisoners languishing in jails in appalling conditions and above all to defend democracy, to repeal sedition law, unlawful Atrocities (Prevention) Act and repressive state laws and to restore citizens rights of dissent,” further stated the release.