Jamshedpur recorded 31.4mm of rain while Ranchi received around 5mm 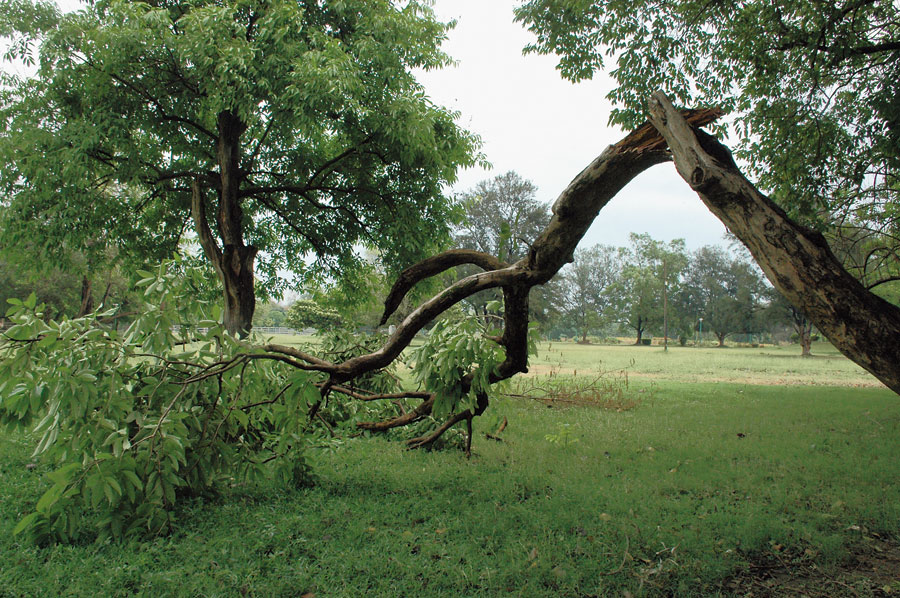 A fallen tree at Jubilee Park in Jamshedpur that bore the brunt of the storm on Tuesday.
Picture by Bhola Prasad
Our Special Correspondent   |   Jamshedpur   |   Published 21.04.20, 06:44 PM

Day temperatures dropped abruptly by 7°-8°C after the season’s fifth Nor’wester hit Jamshedpur, Ranchi and several other places in Jharkhand in the small hours of Tuesday, resulting in widespread lightning and thundershowers.

Actually, two storms originated from the Chhotanagpur plateau region. The first, triggered at Latehar, covered places such as Koderma, Hazaribagh and Ramgarh before hitting the capital, notching up wind speed up to 65kmph. The second storm originated from Lohardaga and travelled through Khunti and Seraikela-Kharsawan districts before reaching Jamshedpur around 3am with wind speed up to 50kmph.

Another storm hit the steel city after daybreak, which resulted in snapping of power supply in JBVNL command areas. Chaibasa in West Singhbhum also experienced the summer saviour storm at the same time while Ramgarh felt a two-minute snap squall.

Jamshedpur recorded 31.4mm of rain, Chaibasa got 30.3mm, Ranchi received around 5mm while Daltonganj, the Palamau headquarters, recorded around 2mm of rain.

“The Nor’wester was triggered by a cyclonic circulation over eastern Madhya Pradesh,”said Ranchi Met Centre director S.D. Kotal. “It moved in the north-westerly direction covering several parts of Jharkhand before it moved south-east towards Bengal.

“Two other weather systems are currently active, resulting in thundershowers and lightning in neighbouring areas of Bengal and Odisha.”

A weather analyst at the Patna Meteorological Centre said rain and storms are likely to hit several pockets of central, northern and southern Jharkhand in the next few days.

Branches of trees fell at several places including Jamshedpur due to the impact of the storm.