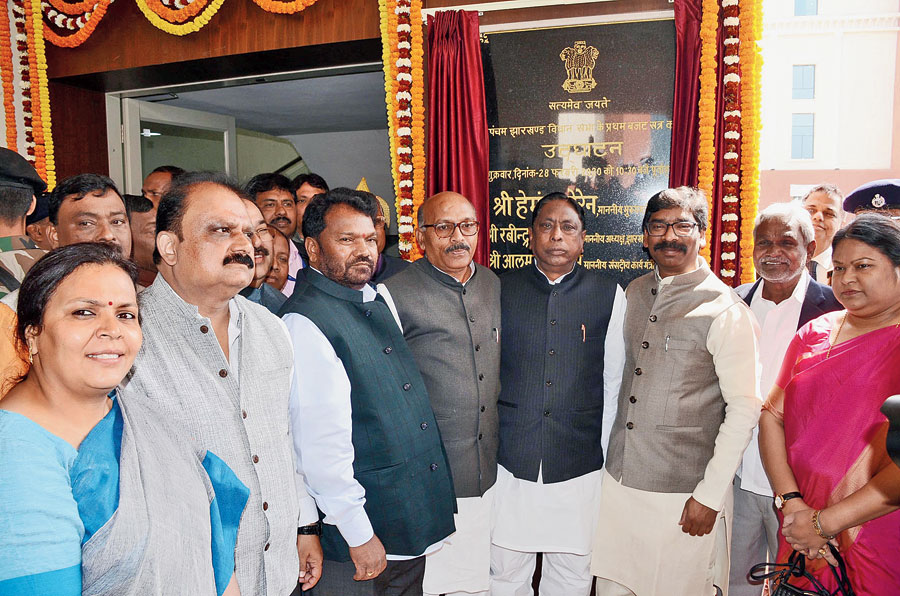 Speaker Rabindra Nath Mahato (fourth from left) with chief minister Hemant Soren and other MLAs after the inauguration of the budget session at the new Assembly building in Ranchi on Friday.
Picture by Prashant Mitra
Animesh Bisoee   |   Ranchi   |   Published 28.02.20, 06:50 PM

The Hemant Soren-led government has won the election but seems to have missed out on a perk that comes with it, the honeymoon period.

In a change of guard, people are usually indulgent for the first few months as the new government finds its feet. Not this time. Everyone wants the two-month-old Hemant-led government to quickly solve problems that had dragged their feet for five years during the tenure of the BJP government led by Raghubar Das.

The BJP, rejuvenated by the entry of Babulal Marandi, is already in attack mode, dubbing the government “Twitter ki sarkar” and “anti-people”. On the other end of the spectrum, outfits like Jharkhand Janadhikar Mahasabha want to know when the pathalgadi FIRs will actually be dropped and when the new government will officially condemn the new citizenship matrix.

And there are rumblings in ruling ally Congress over the induction of Poreyahat MLA Pradeep Yadav.

Ground realities are, however, bumpy. The Hemant government finds itself cash-strapped at a time people’s expectations are sky-high.

The JMM-Congress-RJD combine won 47 seats to inherit a debt-ridden state vacated by the Das government. According to the state government’s Economic Survey 2018-19, the state had a debt of Rs 83,782.96 crore.

The Hemant government has spoken openly about “rethinking” schemes of the previous government that the new dispensation feels are more cash-draining propaganda than anything else.

There are indications that the Hemant government will withdraw the Mukhyamantri Krishi Ashirwad Yojana launched by BJP government last year before elections to give marginal farmers of the state Rs 5,000 per acre.

The Hemant government is also mulling doing away with the scheme launched in June 2017 that allowed women to register their first immovable property worth up to Rs 50 lakh for a token amount of Re 1 stamp duty.

The BJP, which is yet to explain how Jharkhand is debt-ridden despite the double-engine benefits, is branding the Hemant government’s tough stand on populist schemes as “anti-people”.

“We have witnessed law and order breakdown with the lynching of tribals in West Singhbhum, communal flare-ups in Giridih and Lohardaga. Now, the talk of rolling back popular schemes of our government has proved the anti-women and anti-farmer stance of the new government,” Prakash said. “We won’t sit idle. We are watching every move of the government and will launch a mass protest as and when the government scraps the welfare schemes.”

JMM general secretary Vinod Pandey defended the government’s intent behind the probable rollback of the farmers’ and the women’s property registration schemes.

“The government has had in-depth talks with bureaucrats and domain experts about the ground realities of both the schemes. The scheme for women property owners has been grossly misused and only benefited middle-class and affluent women. Also, giving a measly dole of Rs 5,000 per annum per acre to a farmer would hardly solve any of their problems but will drain the state coffers. The scheme is a mere duplication of the existing Pradhan Mantri Kisan Samman Nidhi. We are working on waiving farmers’ loans and building up rural infrastructure so that farmers do not need such doles,” said Pandey.

An IAS officer, who did not want to be named for obvious reasons, said the Hemant government has shown the willingness “to go that extra mile to enable people reap benefits at the ground level rather than making big announcements to grab headlines”.

“In the recent review meetings chaired by the chief minister it was clear that the focus was on finding long-term solutions to problems rather than shrouding them in bureaucratic morass,” said the senior civil servant, who attended many of those meetings.

What about the “Twitter governance” charge? The bureaucrat smiled: “Personally, I think there is a flip side too of being too active on Twitter. There is a tendency of the masses misusing this (the instant and direct virtual access to the CM).”

The chief minister’s press adviser Abhishek Prasad said Hemant was not deterred at the criticism of being Twitter-active.

“Hemant ji is keen that action and follow-up should be fast and transparent. So far, it has been successful. We do not mind what other parties say till the time people are happy.”

He added that they all knew that the challenges before them “are enormous” and “time is short”. “We have to do what we can, and as fast as we can, to fulfil our promises to the masses” he said.

Another JMM insider said: “Too many people will be happy if we fail or are discredited.”

Agreed Congress Jamshedpur West MLA and health minister Banna Gupta, who also takes health-service-delivery complaints on phone and Twitter. “We do not mind the criticism of the Opposition,” he said. “Our goal is clear, solve problems in the shortest possible time.”