In letter to DGP, party complains that police did not return his licensed firearm after Assembly polls 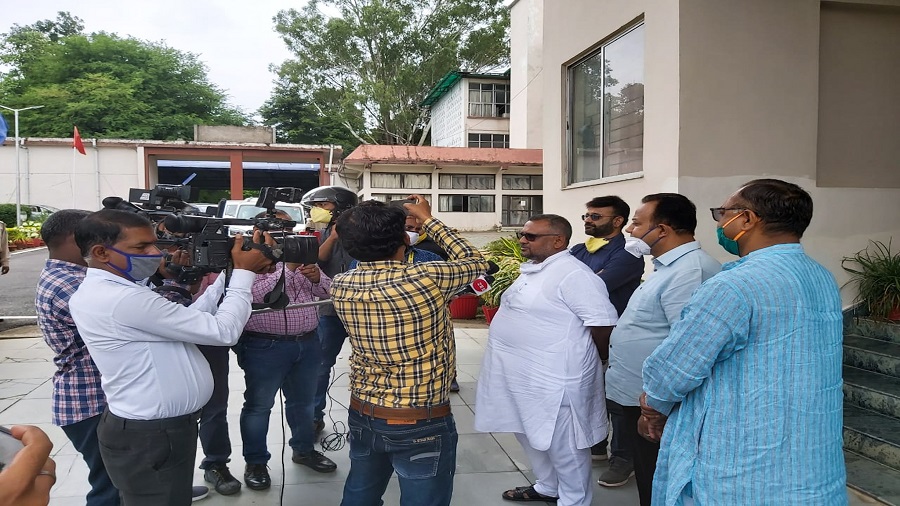 Murdered BJP leader Jaivardhan Singh did not get his licensed rifle back from police after last year’s Assembly elections despite several appeals, the party alleged in a letter addressed to DGP M.V. Rao on Monday, insisting that his demand for security also went unheeded.

Singh, Chatra MP Sunil Singh’s local representative, was killed in Latehar’s Barwadih area on Sunday night around 7.30pm. Unidentified criminals walked up to him while he was sitting near a Pragya Kendra at Barwadih market and fired two bullets from close range killing him on the spot.

The killers escaped in the ensuing commotion.

In its letter, handed over the DGP by a four-member party delegation, the BJP said that Singh had surrendered his rifle to the police during the Assembly elections in accordance with the model code of conduct.

“He (Singh) visited Barwadih police station several times to get his rifle back, but police did not return it to him. He also sought security citing threat to his life, but police turned a deaf ear,” the BJP said, demanding action against the concerned policemen.

A senior police official of Latehar, however, said that Singh's rifle was not returned to him as he faced criminal charges under certain sections of the IPC. “There is no other reason for not returning the rifle to him after the elections,” he said requesting anonymity.

No arrests had been made for Singh's murder at the time of filing this report on Monday evening.

DGP Rao said the police had some vital clues and that the killers would be behind bars soon. “I can’t reveal strategic details but the case will be cracked soon. We have got some leads,” he told the media.

Talking to the media after the meeting, Verma said, “The way criminals killed our worker is unpardonable. Jharkhand has rarely seen such a gory act. We demand quick arrest of the criminals and action against police officials who failed in their duty.”

BJP, which has ruled Jharkhand for the longest duration and is the second largest party in the Jharkhand Assembly, has threatened to launch a mass agitation against the deteriorating law and order situation of the state.

“The perpetrators had the audacity to casually walk up to a person and shoot him dead in a busy market. There is no fear of police in such criminals anymore,” said Shahdeo, who later visited Singh's family to convey condolence messages on behalf of the party.

Former chief minister Raghubar Das said there was a “return of jungle raj” in Jharkhand. “The entire law and order machinery of the state is crippled. We will hit the streets against the police and government if the culprits aren’t nabbed immediately,” he said.

Congress spokesperson Alok Dubey defended the government. “Unlike the BJP regime of the past when the crime rate was at an all-time high, this government is committed to the safety of its people. BJP was known for land grab, atrocities against tribal, and the marginalised because of which it got unseated in the elections. Police are doing their job. The results will be visible soon,” he said in statement.