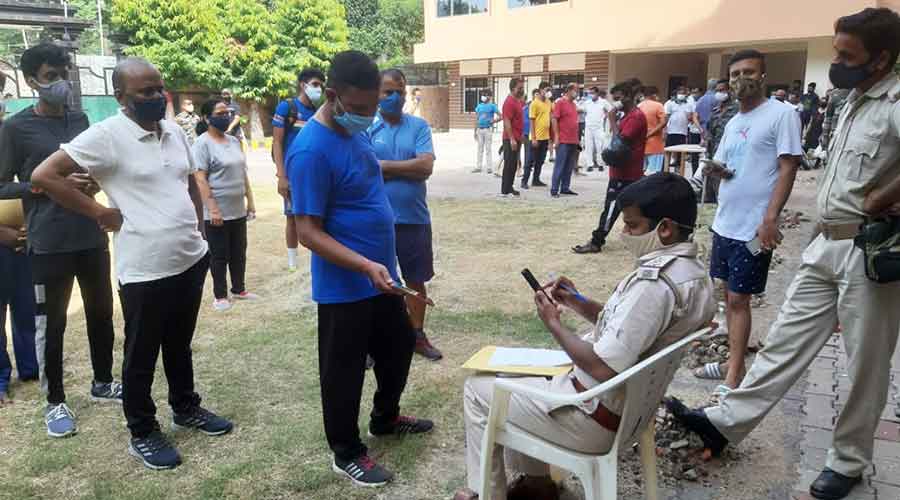 Jamshedpur police detained as many as 70 morning walkers on Wednesday for not wearing masks and following social distancing norms.

The drive was carried out near Jubilee Park in Sakchi, Joggers’ Park in Sonari and at Kadma and Sidhgora.

Those detained were asked to board a bus and were brought to Motilal Nehru Public School in Bistupur which was converted into a part Covid camp and part jail.

The detained were also asked to undergo a Rapid Antigen Test. All of them were found negative.

Jubilee Park, Joggers’ Park, Kadma-Sonari Link Road and Sidhgora Park attracts the maximum number of morning walkers. But, since the parks are closed due to the lockdown the morning walkers prefer to walk on the roads outside the parks.

A police official said that several of those detained were not wearing masks, mandatory as per Covid protocols.

"We have been receiving complaints against morning walkers violating Covid norms as they move in groups. Today, was the second day of the drive. A similar drive was carried out at the Kadma-Sonari Link Road yesterday during which a good number of morning walkers were detained and later released on PR bond, "said the police official deployed at the school adding that it may be a harsh decision, but maintains it is for the good of people in general.

"We are only asking people to remain indoors as it will help in breaking the Covid chain thus preventing transmission of the virus," he further said.

Notably, the cops have been strict against those violating the lockdown rules and Covid protocols.

On Wednesday, a large number of commuters who could not produce e-passes and valid I-cards had to pay fines in different parts of the steel city.