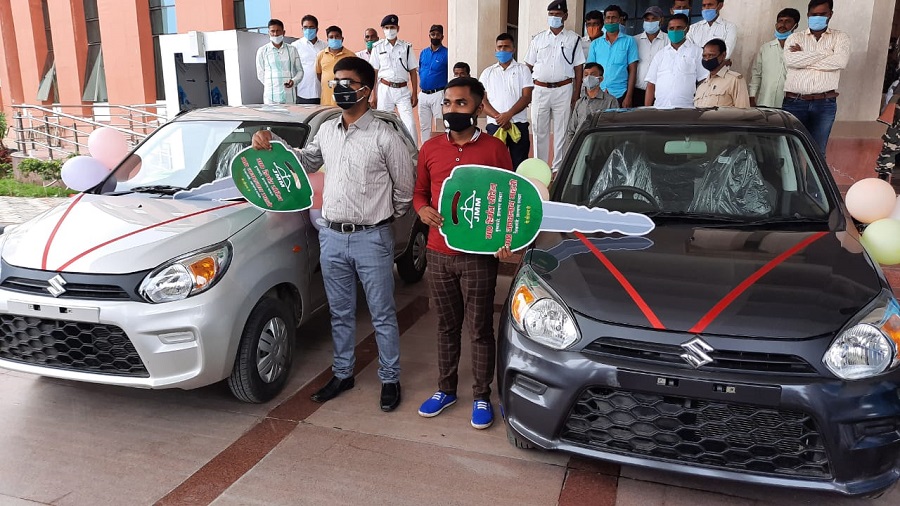 Inter science topper Amit (left) and matric topper Manish along with the cars they were gifted by education minister Jagarnath Mahto in Ranchi on Wednesday
Telegraph picture
Our Correspondent   |   Ranchi   |   Published 23.09.20, 09:56 PM

State education minister Jagarnath Mahto gifted two cars to Jharkhand Academic Council (JAC) matric and intermediate (science) toppers on Wednesday, keeping a promise he had made to meritorious students when the results were declared in July.

Accompanied by Assembly Speaker Ravindranath Mahto and (JAC) chairman Arvind Prasad, the minister handed over keys of Alto cars to inter science topper Amit Kumar and matric topper Manish Kumar Katiyar at a low-key ceremony on the premises of the Vidhan Sabha in the afternoon.

“During declaration of results, I had announced to give cars to those who topped in the state. Today, I kept my promise. Others will also get soon,” the education minister said, referring to the toppers in arts and commerce streams.

“I also announce that I will bear all the expenses of further studies of the toppers from next year. This apart, if any student faces financial or other problems while pursuing their studies, he/she can approach me. I shall try my best to help them,” he said, adding that as the education minister, it was his responsibility to ensure a proper education system in the state and also encourage students to aim high.

Jagarnath Mahto has enrolled himself in an intermediate college in Bokaro to pursue studies. He said that he had already bought books and had begun studies even though educational institutions in the state were still closed in the wake of the pandemic.

“Whenever I get free time, I study; in the car while travelling from one place to another.  I may be a minister, but I am also a student now. Who knows, I may be one of the topper’s next year,” he said as the gathering clapped.

Speaker Mahto hailed the minister’s initiative. “Students of this state are good … all that they need is encouragement and support,” he said.

Both toppers were elated about their gifts. Manish, who scored 98 per cent in this year’s matriculation, is from Sahebganj district but appeared as a student of Netarhat Vidyalaya. Son of a small-time farmer, he said that he will cherish this all his life.

“I come from a very poor family of farmers. But my father, Kedar Mahto, never stopped me from pursuing studies. This car will be a gift to him,” he said, adding that he aims to get into administrative services in the future.

Amit Kumar of Giridih, who topped in inter science with 91.4 per cent, is the son of Birendra Kumar Burnwal, who runs a battery shop near Sariya railway crossing. He appeared for the exams from SRSSR High School, Bagodar, in Giridih.

Kumar said after clearing JEE Mains, he is now preparing for JEE advance scheduled on September 27. “I hope to clear the exam and get admission in one of the top IITs in the country,” he said, adding that ultimately, he would try and crack UPSC.