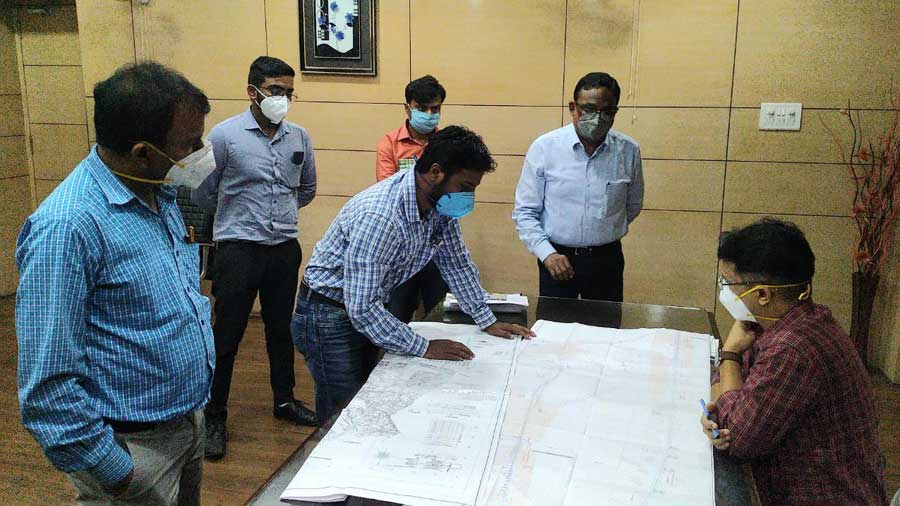 Officials of the Jharkhand Urban Infrastructure Development Company and Ranchi-based consultant RDCS with deputy collector Uma Shankar Singh (right) at the collectorate in Dhanbad on Tuesday.
Telegraph picture
Our Bureau   |   Published 14.10.20, 01:12 AM

Dhanbad deputy commissioner Uma Shankar Singh on Tuesday held a meeting with the officials of Jharkhand Urban Infrastructure Development Company and Ranchi-based consultant RDCS at the district collectorate over the proposed 3.5-km flyover from Matkuria to Binod Bihari Mahto Chowk via Ara More of Wasseypur. The proposed flyover is expected to lower the traffic burden on the Bank More flyover. Indian Railways had given a no-objection certificate to the Dhanbad Municipal Corporation for the construction of the flyover in February last year.

The proposal for the construction of the flyover had been approved by the Dhanbad Municipal Corporation at its board meeting held on November 20, 2018.

The issue of the flyover was first discussed during the high-level meeting held in Dhanbad on October 23, 2017, under the chairmanship of the secretary of road construction department, Mast Ram Meena.

Chandan Pathak, 18, and Roshan Pathak, 15, sons of BCCL employee Manoj Pathak, drowned in the Damodar river in Dhanbad’s Mahuda police station area on Tuesday morning. The incident took place when the brothers were bathing before offering prayers at a nearby Shiva temple. Their parents and other family members were also there. Roshan started drowning while bathing and Chandan, who tried to save his brother, was also caught in the strong current of the river. Though Chandan was rescued from the river by local villagers, he died on the way to the hospital. Roshan’s body, however, was fished out of the river an hour after the incident.

Simran Priyadarshini, a third-year undergraduate student of electrical engineering at BIT Sindri, secured the second runner-up position in the finale of Tata Steel’s Women Of Mettle competition which was held online on Tuesday.

“Simran again established the fact that our students are second to none,” said the official in charge of training and placement at the institute, Ghanshyam Rai.

“She will be entitled to a scholarship of Rs 2 lakh over the duration of the course with the opportunity to join Tata Steel as a management intern,” said Rai.

“The Women of Mettle scholarship programme is a one-of-its-kind diversity-and-inclusion initiative not just in India’s steel sector, but across the country’s wider manufacturing spectrum,” said Rai.

“For various reasons, the participation of women in the manufacturing sector has been low in India. As a pioneer in bringing in the best HR and labour practices in the country, Tata Steel continues to work towards this cause and enhance diversity in the workplace and thus organises the Women of Mettle competition,” Rai added.

Protesters demanding the arrest of a homeopath accused of molesting a girl at his clinic blocked NH23 which connects Bokaro and Ranchi on Tuesday.

The family members of the girl and other residents of the area staged a demonstration before the Balidih police station. They were demanding the immediate arrest of Anan Jha, the homeopath. The traffic was disrupted for half an hour.

“We assured the demonstrators that we would arrest the accused soon, following which they dispersed,” a police officer said.

The 21-year-old tribal girl was allegedly molested by the homeopath at his clinic on Friday. The college student told her mother about the incident only on Sunday. The police raided the clinic but the accused was missing.

A local ward member was killed with a sharp-edged weapon at Sirmadih village in the Birni police station area of Giridih. Police have sent the body for post-mortem. Investigations are on to ascertain the motive of the murder.

Panchayat representatives have demanded the arrest of the murderers. A land dispute could be the reason for the killing, the police said.

BSF inspector-general Ravi Gandhi with jawans at the event in Hazaribagh.
Vishvendu Jaipuriar

An event was organised at the Border Security Force’s (BSF’s) training centre at Meru where jawans were asked to take a pledge to observe Covid-19 protocols.

The centre has a 100-bed Covid-19 ward. It is located 11km from the Hazaribagh district headquarters.

Garhwa police on Tuesday arrested four youths in connection with the murder of an elderly woman in Lakhana village.

Sunderkali Kuar, 68, was trying to mediate in a dispute at the time of the incident, the police said.

The accused have been identified as Golden Khan, 19, Mustafa Khan, 20, Gaffar Khan, 19, and Ashik Khan, 19, all residents of Lakhana village in the Garhwa police station area.

The incident took place around 8pm on Friday. Niranjan Chandravanshi, the woman’s grandson, was roaming with three of his friends while playing songs on his mobile phone. A youth from a particular community took offence to the songs being played. A scuffle ensued.

On hearing about the assault, the woman reached the spot and tried rescuing her grandson. However, she was also severely beaten up and injured.

Her family members took her to the Sadar hospital where doctors declared her dead, subdivisional police officer Bahman Tuti said. Based on Chandravanshi’s complaint, the police lodged an FIR against four persons under Sections 147, 149, 323 and 302 of the Indian Penal Code.

The placement season at BIT Sindri began on Tuesday with Hindustan Unilever selecting two BTech students, Anmol Agarwal of chemical engineering and Ashish Ranjan of mechanical engineering, at a salary of Rs 8 lakh per annum.

A website to issue tokens online to devotees wishing to visit the Chinnamastika Siddhpeeth Rajrappa temple has been launched by authorities. Those wishing to visit the temple can go to jharkhanddarshan.nic.in and book their slots. Another website which was accepting bookings, rajrappa.in, has shut down the facilty. Bookings made prior to October 16 on the old site are valid.

Bookings can be done for a maximum of four people at a time and Aadhar details are mandatory for those aged above 10 years. It is also mandatory to carry a copy of the token (enter printed or downloaded to the phone) and an identity card at the time of the visit.