Meet a traffic cop who simply ‘loves to help’

Winner of the president’s medal, Devendra singh reaches out to people in distress 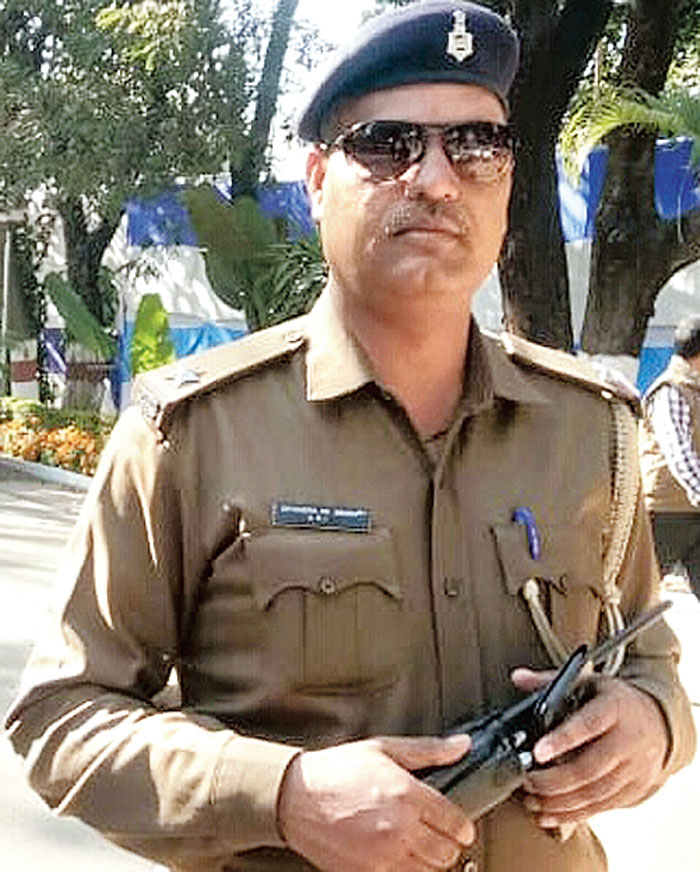 Libnus Tirkey, a constable of Special Auxiliary Police posted at Keredari in Hazaribagh, cursed his luck on January 4 when he lost his wallet containing cash, his ID and debit cards in Ranchi.

Tirkey, who’d come to Ranchi on official work, had not believed that a traffic cop here in the capital would take extra effort to track him down and return the wallet.

Traffic assistant sub-inspector Devendra Kumar Singh proved to be that cop who went beyond the call of duty. And it isn’t in Tirkey’s case alone that Singh has taken the trouble, he does it as a matter of course.

Talking to The Telegraph, Tirkey said he had come to Ranchi for some official work when he lost his wallet at Hinoo. “Frankly, I was very dismayed because I thought that realistically it was next to impossible to get it back. I had everything in that wallet, from my ATM cards, my army canteen card, my Aadhaar card. I had cash too, but losing it was the least of my worries,” said the SAP constable.

On January 9, Tirkey received a phone call from the SBI.

“The person on the other end of the phone inquired whether I lost my wallet along with the debit card. I nearly jumped out of my skin in surprise,” Tirkey said. “He informed me that traffic ASI Devendra Kumar Singh had found the wallet and wanted to return it to me. On Saturday (January 11), I visited the traffic post at Hinoo where Singh handed me over my wallet, everything intact. I appreciated him profusely and blessed him. Every cop should be like him.”

Asked, ASI Singh shrugged it off as “no big deal, just doing my job”.

Singh, who joined the police force in 2000 was transferred to Ranchi traffic police in 2016.

If Singh finds lost purses or wallets, documents or mobile phones, he not only tracks the owners down, but also ensures safe delivery of the items.

This apart, the elderly, children and patients caught in traffic snarls have often found a helping hand in Singh.

The state and district police have acknowledged his services with cash prizes and citations at least on 72 occasions. Last year, he was awarded the President’s Police Medal for meritorious services.

Known to be jovial and helpful, Singh is nicknamed Good Samaritan by his colleagues.

Singh smiles at the nickname. “What can I say. I think I am just doing my duty. I love helping people. The smile that lights up people’s faces when they get back something they had thought they had lost forever...that’s good to see. That drives me to do my best,” he said.

On Tirkey’s wallet, Singh said he found it lying unattended. “I sent a message about the wallet in our chat group (of traffic cops) on WhatsApp. But no one knew of a complainant who’d lost his wallet. So I decided to track down the owner from the cards in the wallet,” he said. “I visited an Aadhaar enrolment center and requested the staff to check whether any mobile phone number was attached to the Aadhaar card I found in the wallet, but there wasn’t. I had better luck with the bank debit card.”

“Singhji really walks the extra mile,” said one of his colleagues. “Take Saturday evening. A rickshaw puller was injured by a speeding car. Singhji promptly called an ambulance and hospitalised the rickshawpuller.”