Many protesters injured after clash with police at Morabadi 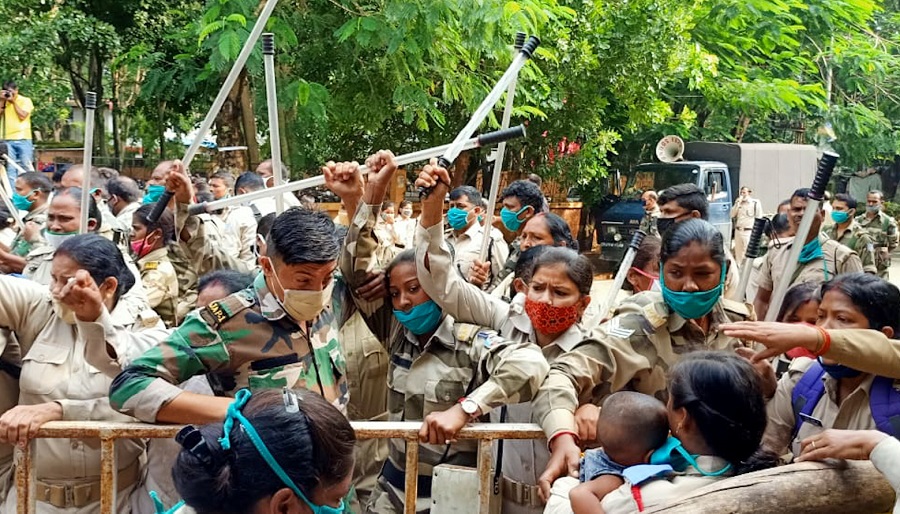 At least a dozen people were injured in a clash between police and those who had been hired on contract three years ago to help them at Morabadi ground on Friday after an agitation for regularisation of jobs went out of hand.

Over 2,000 assistant police personnel, including women, who had come to Ranchi from all parts of the state, have been camping at Morabadi ground for a week to demand proper pay and a permanent job as they had apparently been promised by the former BJP government of Raghubar Das when they were hired on contract in 2017.

Despite spending the last few days in the open, braving the hot sun, many of them complained about being ignored by the Hemant government even though leaders of the Opposition parties lent them support.

On Friday afternoon, the group had planned a march to Raj Bhavan and the chief minister’s residence. But the protesters were stopped by police around 2pm. Angry protestors, many of whom were with their toddlers, tried to demolish police barricades prompting security personnel to first  lathi-charge them and then fire teargas shells.

This escalated into a clash with the protestors then resorting to stone pelting, leading to injuries on both sides. Tension prevailed for about two hours before Ranchi’s senior SP S.K. Jha, SDO Sameera S, among others, reached Morabadi to control the situation.

Notably, the state government has banned any gathering or protests in the wake of the Covid-19 pandemic.

SDO Sameera said that situation was brought under control by the evening. “Police was forced to resort to mild lathi-charge to control the crowd that had started moving towards Raj Bhavan and the chief minister’s house. Soon, all of them turned back,” she said.

Chief minister Hemant Soren told reporters at Project Building later that his government was open to holding talks to understand the problems of the assistant policemen. But he clarified that the state government would not tolerate lawlessness.

“They are free to represent their concerns in a delegation in a peaceful manner. The government will be sympathetic to their cause and will do whatever possible under the law. However, if anyone tries to break the law, then the administration will have to act tough,” he said.

Opposition BJP, however, dubbed the police lathi-charge as barbaric. “The incident has exposed the Hemant Soren government’s concerns towards those fighting for jobs, employment. The alliance government had promised one lakh jobs each year. But after coming to power, it has forgotten their poll promise. The assistant police personnel had given their blood and sweat for the state government and all they are getting now are lathis,” said BJP spokesperson Pratul Shahdeo.

Notably, assistant police personnel were hired on contract basis in 2017 on monthly honorarium of Rs 10,000 by the former BJP government headed by Raghubar Das. They were then assured permanent reinstatement gradually. However, after their contract period ended in August this year, their contracts have not yet been renewed by the JMM-Congress-RJD government.