Weather to give anxious moments 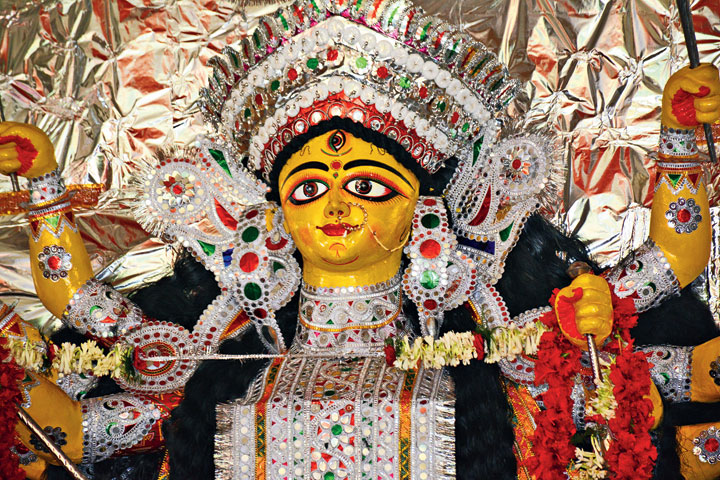 For pandal-hoppers Mahasaptami turned out to be a Maha-extravaganza on Saturday.

Jairam Youth Sporting Club in Adityapur, one of the big-budget Durga Puja pandals, attracted thousands of visitors right from the morning.

With former Ichagarh legislator Arvind Singh at the helm, this year the Puja committee has focussed on the ill-effects of plastic, replicating a pandal made of a million plastic bags. On Mahasasthi evening and night an estimated 30,000 people turned out at the pandal.

“We went out pandal hopping last night itself (Friday), apprehending a change in weather from Mahasaptami, as predicted by the meteorological department. My family and I went around a dozen pandals in steel city and Adityapur,” said software professional Anirban Chatterjee, who stays in Bistupur.

The mood was equally upbeat at The Bengal Club in Sakchi, a traditional Puja with a favourite adda joint.

The homely flavour of the pandal with its traditional idols was a delight for all. The numerous food stalls added to the festive spice.

Youngsters sported the hottest trends of the season at the Circuit House Grounds, famous as the most upscale Puja of the steel city, which is being organised by North Area and Circuit House Sarbojanin Durga Puja Committee.

Durga Puja, however, is incomplete without the Beldih Kalibari bhog. No big budget, no themes, no thrills, just the pure taste of tradition.

The traditional idol of the goddess in daker saaj has always been the favourite among the residents. On Saturday, people spent hours participating in the rituals and savouring the delicious bhog.

Pandal-hoppers were also keen to know how the weather would behave from Mahaashtami. Overcast conditions prevailed in Jamshedpur and its adjoining areas.

IMD Ranchi on Saturday issued a forecast of moderate thunderstorm and lightning in some parts of Singhbhum, Gumla, Deoghar, Pakur, Godda, Dumka, Hazaribagh, Chatra, Dhanbad and Jamtara in the next 24 hours because of impact of two cyclonic circulations over Jharkhand, Odisha and Bengal.