The tanker, which was on its way from Odisha to Nepal, fell on its side owing to its load around 20km from Ramgarh town 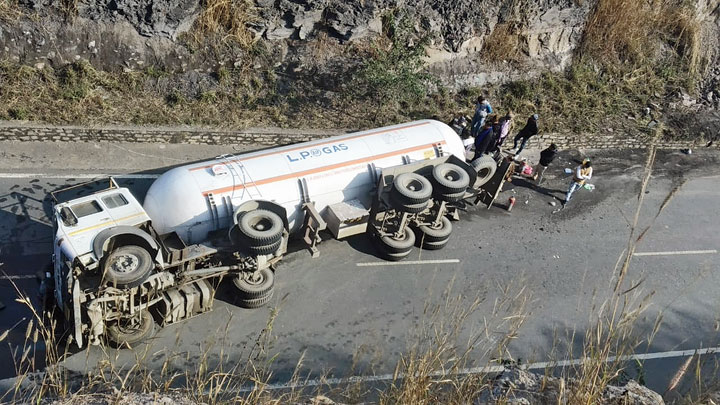 A tanker carrying liquid petroleum gas (LPG) flipped on its side on NH-33 in the Kujju valley area under Mandu police station limits in Ramgarh on Monday morning, stopping traffic on the state’s lifeline for nearly 11 hours.

The tanker, which was on its way from Paradwip in Odisha to Nepal, fell on its side owing to its load around 20km from Ramgarh town. Bystanders reported the fuel leaking from the massive fuel on the highway.

With fuel leaking, the district administration and police immediately warded off vehicles and even pedestrians from the area on the busy national highway that links state capitals Ranchi and Patna.

Traffic jams on both ends of the cordon went up to around 15km as the police, district administration and teams of Hindustan Petroleum Company Limited (HPCL) from Bokaro and Hazaribagh tried to keep the damage to a minimum.

A traffic jam on the NH-33 near Kujju Ghati

Technical officials from HPCL were called to prevent a fire as the leaking fuel made this danger imminent. The HPCL teams emptied one of the tanker’s blocks, which was leaking, of fuel.

Later, four cranes were called to lift the tanker from the spot.

Traffic started moving on this highway stretch by around 6pm. Till then, vehicles coming from Hazaribagh, on their way to Ranchi, were diverted through Balsagra village.

Tanker driver Pavan Kumar, who suffered minor injuries, was treated at Ramgarh itself.

Villagers from the valley also gave water to hundreds of people stranded in the massive traffic jam all day, a policeman said, praising this humanitarian act.