Pigeon released in 20-minute function to kick off celebrations 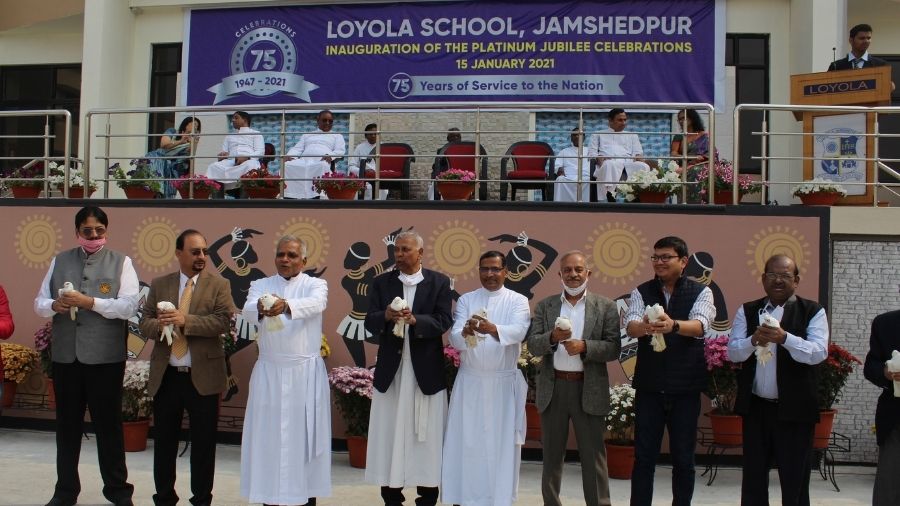 Jesuits and members of the Loyola Alumni Association at the launch of platinum jubilee celebrations of Loyola School at Beldih, Jamshedpur, on Friday.
Telegraph Picture
Antara Bose   |   Jamshdepur   |   Published 15.01.21, 09:19 PM

Loyola School, Jamshedpur kicked off its platinum jubilee celebrations on its premises in Beldih on Friday by conducting a small event, involving teachers, Jesuits, and members of the school’s alumni association.

Although the school has a lot of plans for its platinum jubilee year, the celebrations will entirely depend on the Covid-19 situation.

The entire function of about 20 minutes was graced by the Jesuits, primarily to announce the commencement of the celebrations.

The programme on Friday included a welcome speech, release of balloons and pigeons as a mark of the platinum jubilee and vote of thanks.

Father Jerome Cutinha, the Provincial of the Jamshedpur Jesuit Society declared the opening of the platinum jubilee celebrations.

The school has ambitious plans for marking the year in a special way. The celebrations will culminate in the grand closing ceremony, which is scheduled to be held in December with the get-together of alumni members.

“Loyola for its students is an emotion and a way of life, more than just a school. We hope to have a spectacular platinum jubilee. All are hopeful that the situation will become normal so that the celebrations may take place as planned. We would want to take one step at a time seeing the Covid situation,” said Rajiv Talwar, the senior vice president of Loyola Alumni Association and chairman for the Platinum Jubilee Organising Committee.

His words assumed significance as former students of the school and members of the Loyola Alumni Association had a golden walk down memory lane as they reminisced about their growing years in the portals of the institution.

Loyola School was founded in 1947 and is managed by the Jesuits of the Society of Jesus. The day school with about 3200 students from KG to Std. XII offers Arts, Science and Commerce at the higher secondary school level.