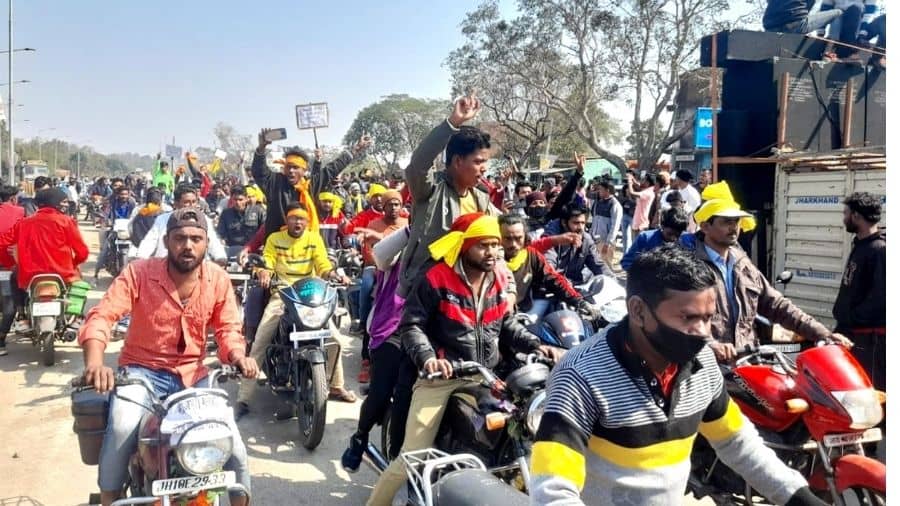 The ongoing stir of language right activists turned violent on Sunday with residents forming a human chain venting their ire on inclusion of Bhojpuri and Magahi in regional language list for Dhanbad and Bokaro.

To add to it, the vehiucle of BJP leader and former Koderma MP Ravindra Rai was attacked near the Telmachcho bridge of Bokaro at around 12.30 pm. The incident during which the wind screen and name plates of the car were damaged took place when he was heading towards Dhanbad from Bokaro in his car along with his body guard and driver.

The driver and bodyguard of Rai were also allegedly manhandled by protesters, who also pushed the MP and he somehow escaped from site and lodged an FIR against unidentified persons in Chas Mufassil police station of Bokaro district.

Talking to media later, Rai said that he was unaware about the human chain agitation and heading towards Dhanbad to participate in the farmer’s cell meeting of BJP scheduled in Dhanbad when the incident took place. "The agitators stopped my car at several places from ITI More of Bokaro to Telmachcho Bridge situated on Dhanbad Bokaro border,” said Rai.

“I also talked to the agitators but when my vehicle reached near the Telmachcho bridge they forcibly took me out of the car by stopping the car and pushed me in the midst of large number of people and also pushed me but fortunately some people in the gathering identified me helped to get back into the car but the irate mob damaged the windscreen and nameplate of my car,” said Rai. He also took a jibe at the state government.

“When, formers MPs and people’s representatives are not safe in the state, the fate of common people and overall law and order situation of the state can be assumed,” summed up Rai.

The ongoing protest intensified on Sunday with local language right activists making a 50- km long human chain from Telmachcho to Chandankiyari in Bokaro. The human chain was made under the aegis of Jharkhand Bhasa Bachao Sangharsh Samiti.

Talking to The Telegraph Online on Sunday, Gokul Mukherji an activist said, “More than two lakh agitators from different parts of the state took part in the human chain. The enthusiasm can be assumed from the fact that they began congregating at their allotted site since the early morning.”

Another language right activist on condition of anonymity said, "The government has acquired mandate from the people to protect local residents, local language and local culture but after assuming power it has made a U turn and included Bhojpuri, Magahi and Angika spoken by a minuscule section. We are not going stop here and will continue our agitation till the government revokes its decision. We will take out a massive torchlight procession across the state on February 3 which will be followed by a symbolic death procession on February 4 of all the 10 MLAs in Dhanbad and Bokaro districts."