Gumla coverage of school kids at 60%; Bokaro, East Singhbhum at 52% 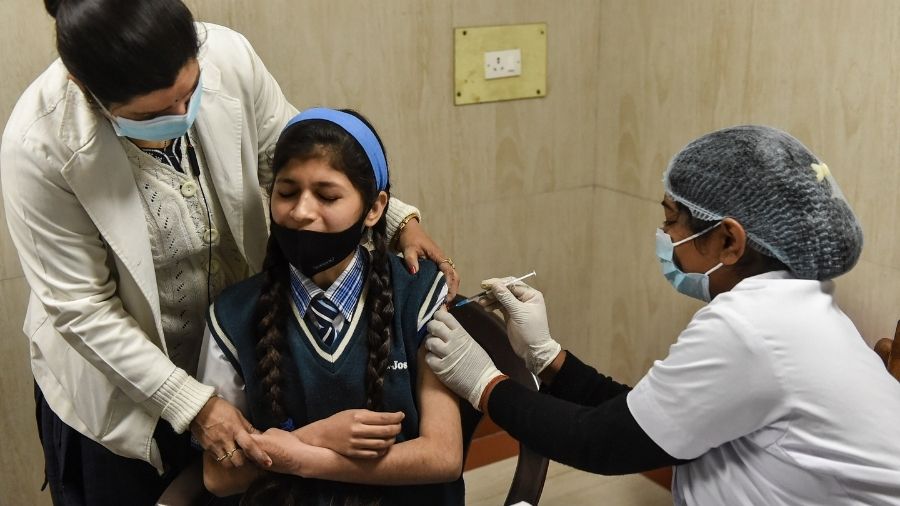 A doctor involved with the vaccination programme said that they had worked on numerous strategies to speed up inoculation of teens since January 3.
File picture
Our Correspondent   |   Ranchi   |   Published 27.01.22, 07:24 PM

Koderma is now the first district in Jharkhand to vaccinate all identified beneficiaries in the age group of 15-17 with the first dose, deputy commissioner Aditya Ranjan claimed in a tweet on Tuesday night and later apprised people about the feat during the district's Republic Day function.

Vaccination for teenagers was launched nationwide since January 3. In Koderma, the administration had initially estimated around 52,067 people in this age group.

Civil surgeon O. P. Saxena said, “Yes, we have vaccinated everyone in the age group of 15-17 with the first dose. The success lies in astute planning and proper monitoring both at the state and district level by senior officials. Health workers, too, worked hard to vaccinate the eligible beneficiaries by January 26.”

A doctor involved with the vaccination programme said that they had worked on numerous strategies to speed up inoculation of teens since January 3. “Vaccination drives were held on a war footing at schools with the help of school managements. To cover dropouts or those out of school, the administration simultaneously ran door-to-door campaigns. We also took the help of local NGOs to reach the targeted audience," he explained.

The administration also set up volunteers (bal mitra) at school to motivate others and ran campaigns like "har ghar dastak". He said, “In their localities, bal mitras, both young boys and girls, tapped youths in their localities and motivated them to take their jabs.”

As per the vaccination bulletin issued by the state health department on Wednesday night, the cumulative coverage of teens was at 39 per cent of the 23.98 lakh beneficiaries. As per the report, Koderma’s coverage tally was mentioned as 72 per cent but officials in the district claimed that the figures were yet to be updated.

As per the vaccine bulletin, Gumla, another remote district, is currently at second spot with over 60 per cent coverage among  74,526 beneficiaries. Latehar’s coverage is 56 per cent out of 52,846 beneficiaries, both Bokaro and East Singbhum’s coverage is 52 per cent of the target of 149,917 and 166,751 respectively. The remaining districts have logged coverage below 50 per cent.