Ramesh Gholap used clay and organic paint, will immerse the idol at his residence after ten-day puja 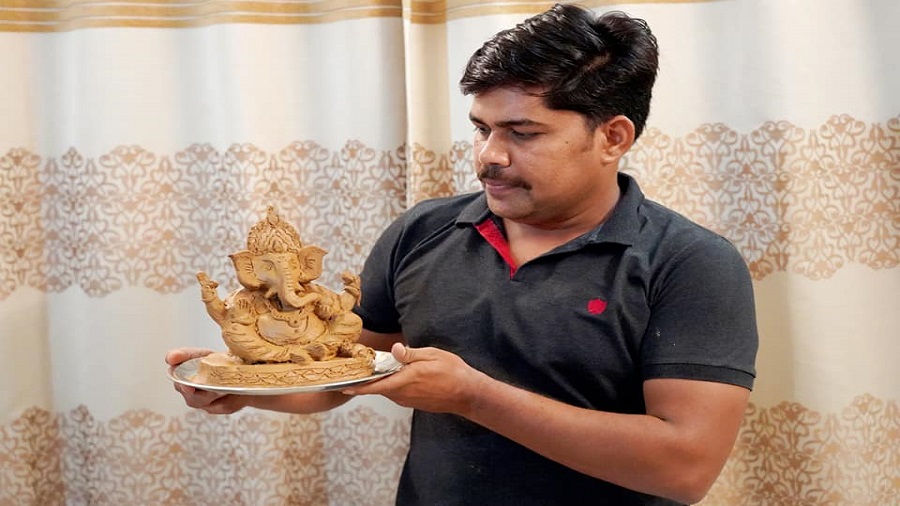 Koderma deputy commissioner Ramesh Gholap started his ten-day Ganesh Chaturthi puja at his residence, by making a small and beautiful idol of Lord Ganesha, which he finished in two hours.

Gholap, son of a cycle repairman who passed away, and a bangle-seller mother, dealt with much adversity before he cracked the prestigious UPSC examination in 2012 to become an IAS officer.

The Jharkhand cadre officer who originally hails from Maharashtra’s Solapur also happens to be a good painter since his college days.

“At that time, I started making idols too,” he said talking to The Telegraph Online, adding that the idea to make the Ganesha idol came all of a sudden.

“It’s a small idol made with clay and eco-friendly colours,” he said.

After the ten days-long puja, he will immerse the idol at his residence.

“I also have a guava sapling which I will plant somewhere in the campus of my official residence after the immersion,” said Ramesh.

A history graduate, Ramesh worked for a few months as a government teacher before joining the IAs.

His father died when he was in class 12.

Ramesh, who is known as Ramu in his village Mahagaon in Barshi Taluka of Solapur, joined his mother in selling bangles despite one of his legs being affected by polio.

He saw her mother running from pillar-to-post to get benefits under government schemes but denied always, which is why he patiently hears out people coming to him and provides solutions to their problems.

“I enjoy my work and personal life as well. I make time to do work like idol making. It gives me immense pleasure,” he added with a smile of satisfaction.