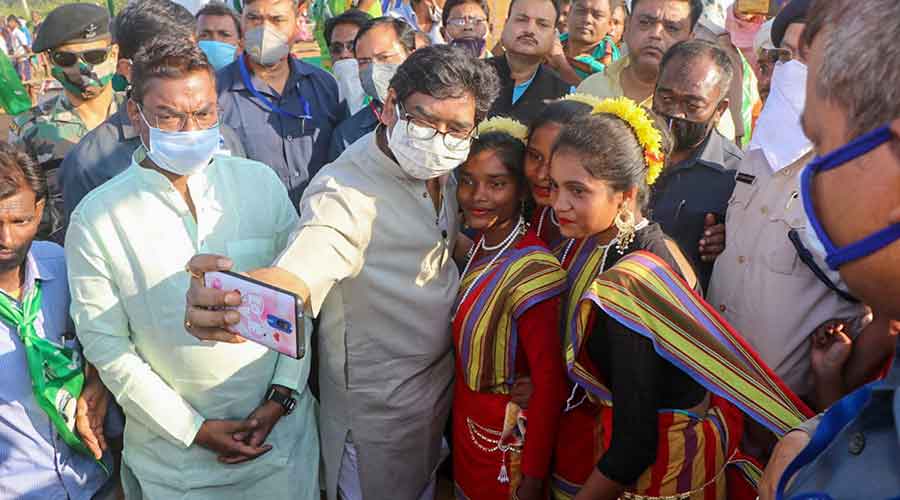 The ruling alliance of JMM-Congress-RJD filed an FIR against state BJP chief and Rajya Sabha MP Deepak Prakash in Dumka on Saturday, accusing him of sedition for trying to hatch a conspiracy to “topple the Hemant Soren government in the state”.

In a clear sign of escalating tensions before the November 3 byelections in Dumka and Bermo, Congress’s district president Shyamal Kishore Singh filed the FIR in the presence of JMM workers while the JMM held a press conference in Dumka to announce the move.

JMM general secretary Supriyo Bhattacharjee said they were forced to lodge a complaint following Prakash’s open threat to topple the democratically elected government in the state. “Yesterday (Friday), at a press conference in Dumka, Prakash, who is also the state BJP president, said that in the next two months, a new government was going to be formed in the state under the leadership of BJP.

“We want to know how? They don’t have the numbers. All their leaders have been trying to confuse and intimidate people by campaigning about a change of guard. There are enough indications to make us believe that the BJP is hatching a conspiracy against the popularly elected government.”

The FIR registered at Town police station accused Prakash under four IPC sections, namely, 504, 506, 120B and 124A. Section 504 amounts to causing intentional insult with an intent to provoke breach of peace, section 506 is about criminal intimidation, section 120-B talks of criminal conspiracy to commit a punishable offense with death while section 124 deals with sedition.

The BJP hit back and dared the government to arrest Prakash before the polls. Party spokesperson Pratul Shahdeo said, “The way sedition charges have been pressed against our president, it seems that he has waged a war against the nation. Police too didn’t use their mind while pressing charges during filing of the FIR. If the state government has the guts, we challenge it to arrest our president before the polls.”

Notably, between 2014 and 2019, when the BJP was in power in Jharkhand, it had slapped several sedition cases against human rights activists and tribal residents, including those involved directly or indirectly with the Pathalgadi movement in Khunti.

Recently, 82-year-old Jesuit priest and reputed social worker Stan Swamy was arrested by NIA which accused him of harbouring links with Maoists in connection with the Bhima Koregaon violence in 2017. “It’s time for BJP members to taste its own medicine,” remarked a JMM leader.

Bhattacharjee said the BJP, which had deployed three of its former chief ministers (Babulal Marandi, Raghubar Das and Arjun Munda) to campaign for the November 3 bypolls, had realised it was losing in both seats. That was why the BJP was creating a fear psychosis among people by talking about a change of guard in the state after the elections. “But let us make it very clear to the BJP that Jharkhand is not Karnataka or Goa,” the JMM leader said.

BJP and AJSU-P with 28 MLAs in all do not have the numbers to claim a majority in the 81-member Assembly. With Dumka and Bermo vacant, and the demise of JMM’s Madhepur MLA Haji Hussain Ansari, the strength of the House is now down to 78. Still, the BJP is far away from a two-thirds majority to form a government.