'EC acting as an extended wing of the BJP, has no jurisdiction in state affairs when model code is not in force' 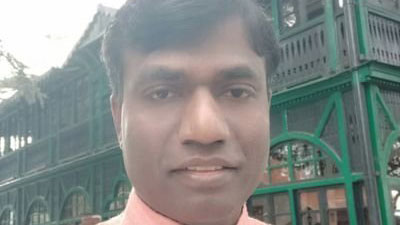 JMM and Congress, partners in the ruling coalition government headed by Hemant Soren, have come out in support of Deoghar deputy commissioner Manjunath Bhajantri whom the Election Commission of India has asked to be removed from office.

In a stern rebuttal to the election commission's order, issued at the behest of a complaint by BJP MP Nishikant Dubey, the parties accused the poll panel of being an "extended wing" of the BJP that is ruling the Centre. Both parties also advised and requested the election commission to not act beyond its jurisdiction when the model code of conduct was not in force in the state.

“We condemn and oppose ECI’s order. In the same breath, we appeal to ECI not to repeat such things in future," said JMM's central general secretary Supriyo Bhattacharjee at a press conference on Tuesday.

On Monday, the election commission sent a letter to state chief secretary Sukhdev Singh directing the state government to immediately remove Bhajantri from his post and not assign him any election related work without its  permission. The poll panel's move was a fallout of a longstanding dispute between Bhajantri (state government) and BJP’s Godda MP Nishikant Dubey pertaining to the Madhepur bypoll held earlier in the  year.

In October this year, Bhajantri ordered that FIRs be registered  against Dubey in various police stations of Deoghar district. Dubey challenged the FIRs and approached the poll panel, which ruled in his favour. The election commission said  Bhajantri’s actions were  “malafide” and his response to the showcause notice issued to him was “unsatisfactory”.

“We have great respect for ECI. People of this country too have great respect for this constitutional body. But the way it has been acting, it is now making us believe that ECI is  an Extended Centre of Intervention appointed by the central government in addition to CBI, ED, IT and other central agencies,” Bhattacharjee said.

He said, “In 2001, Supreme Court (4/2001/JS1) defined the roles and responsibilities of ECI. Only when the model code of conduct is in force during the elections, powers of appointment, suspension, or taking any other civil or administrative decisions rests with ECI. Now, the model code is not in force in the state and an elected government is in place. ECI shouldn’t do the work of the government and tell it where to post its officials."

Bhattacharjee alleged that the election commission remained mum when Deoghar district election officer (Bhajantri) alerted it in the  run up to the Madhepur polls about BJP MP Dubey's attempts to influence voters by  inciting communal tension. “Unfortunately, ECI then ordered removal of Bhajantri till the end of polls. After the polls, the state government again appointed him back as Deoghar deputy commissioner. ECI has no role now,” he said.

The JMM leader also spoke on the election commission's objections to the delayed FIRs filed by Bhajatantri against Dubey. “ECI questioned the timing of FIRs, asking why it was filed about six months after the polls and called it as 'malafide'. The answer  is that crime never dies. Whether an FIR will be admissible or not is for the courts to decide,” he said.

The Congress too hit back in the same vein, referring to how an FIR was filed against an IPS officer (ADG Anurag Thakur) three years after the 2016 Rajya Sabha polls but no questions were raised then. “In the 2016 Rajya Sabha polls when BJP was in power in the state, an IPS officer was accused of horse trading in favour of BJP. The then government despite ECI’s order didn’t file FIRs for three years. It happened only after the change of guard. If that FIR was not wrong, how can Deoghar DC’s FIR against Dubey be wrong?" said Congress spokesperson Rajiv Ranjan.