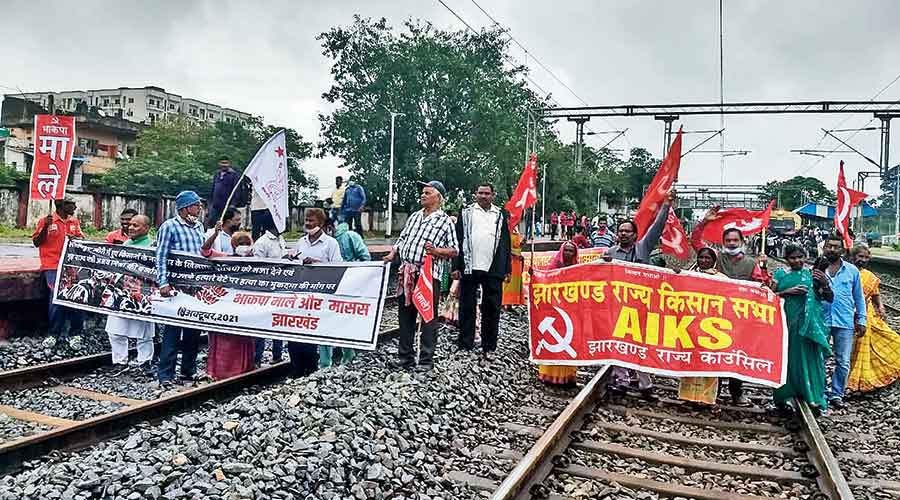 Farmers backed by the Left parties took part in the rail-roko agitation on Monday, as part of the six-hours pan-India call given by the Samyukt Kisan Morcha, in protest against the violence in Lakhimpur Kheri district in Uttar Pradesh.

However, the rail-blockade stir was confined primarily to Namkum near Ranchi, few stretches in the Chakradharpur railway division, Godda railway station, Sahebganj and Palamau station.

“We had undertaken the stir called by the SKM, an umbrella body of farmers’ unions, which has been spearheading the farmers’ agitation since last year against the Centre’s three farm laws enacted last year to protest against the killing of four farmers by the son of Union minister of state for home at Lakhimpur Kheri. But since it is the festive season and rains, the farmers had not been able to gather at most of the station,” said Sufal Mahato, the state coordinator of the Jharkhand Rajya Kisan Sangarsh Samanway Samity (an outfit spearheading the farmer’s agitation in the state since November 2020).

The farmer leader, however, said that they had blocked the stretch near the Namkum station and near railway stations of Godda, Palamau and Sahebganj for nearly half-an-hour before police arrived and drove them away from the agitation site.

“The farmers and the Left parties leaders raised slogans for sacking of Union minister of state for home Ajay Mishra and also repeal of the farm laws and strict punishment for all accused involved in the killing of farmers at Lakhimpur Kheri. The Kharagpur-Hatia passenger train was stopped for half-an-hour after which the police cleared the track,” said Mahato.

The All India Kisan Sabha (a CPI farmer’s front) state unit leader Ajay Singh and Kisan Sangram Samiti’s leader Sushanto Mukherjee said that they have already started planning for taking out protest rallies on October 26, which marks one year of the farmer’s agitation near Delhi border, across all blocks of the state.

The three laws — The Farmers' Produce Trade and Commerce (Promotion and Facilitation) Act, 2020, The Farmers (Empowerment and Protection) Agreement of Price Assurance and Farm Services Act, 2020, and The Essential Commodities (Amendment) Act 2020 — were passed by Parliament in September last year.

The farmers across the country have been seeking the repeal of the three agriculture laws. The protesting farmers along the Delhi borders

have expressed the apprehension that these laws would pave the way for the dismantling of the minimum support price (MSP) system, leaving them at the “mercy” of big corporations.

The government, however, has rejected these claims stating that the laws will only give farmers more options to sell their produce.

South eastern railway chief public relation officer, Niraj Kumar, said that trans services were not disrupted at any where in the railway zone during the farmer’s agitation.