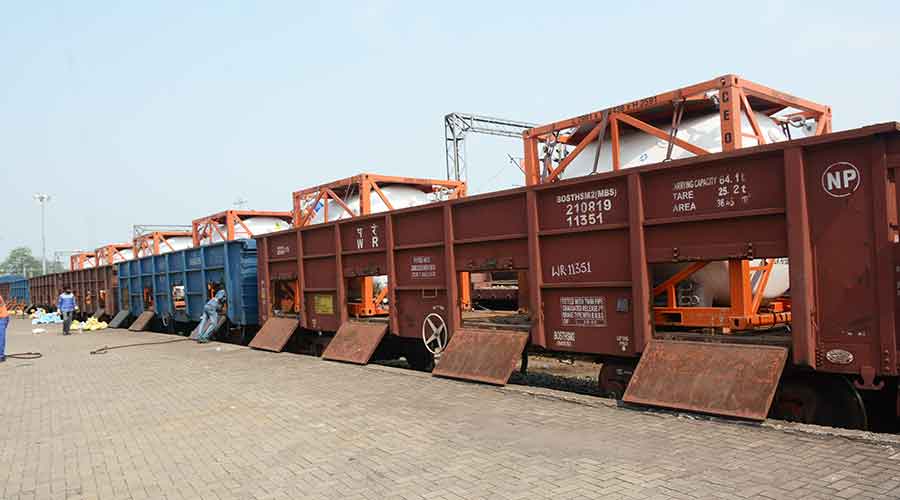 Jharkhand has provided over 8,000 metric tonne liquid medical oxygen, which is 35 per cent of the total transported across the country via Oxygen Express trains, making it the highest contributor among states as the nation goes throuhgh a vicious second wave of the pandemic.

As per figures provied by the Indian Railways, out of over 23,741 metric tonne LMO transported in Oxygen Express trains till date,Jharkhand contributed 8,297 metric tonnes, which works out to around 35 per cent.

The state government came up with an advertisement in this regard with a picture of a beaming chief minister Hemant Soren.

Earlier on May 26, the state water resources minister Mithilesh Kumar Thakur had tweeted about Jharkhand's feat.  Hemant retweeted it to indicate his appreciation.

As per the information in the ad, which was compiled with inputs from the railways and the state control room, Jharkhand was at the top with 35 per cent contribution followed by neighbouring Odisha (27%),  Gujarat (20%), West Bengal (8%), Madhya Pradesh (5%) and others (5%).

Oxygen Express trains were run in from Jharkhand in the wake of the second wave of Covid-19 since April 23. These trains were fed by two major loading points in the state - Tatanagar (Jamshedpur) and Bokaro _ with the two stations having so far delivered 6,207 metric tonne and 2,090 metric tonn liquid medical oxygen respectively to various locations in the country.

In Jamshedpur, two plants of Linde India, a leading manufacturer of industrial gases, supplied the LMO while Inox Air took care of requirements at Bokaro. "On an average per day, we are supplying 550 metric tonne liquid medical oxygen on the basis of requirements which we get from various state governments," said Santosh Bhagat, in-charge of Linde India's liquid oxygen plant at Burmamines in Jamshedpur.

He, however said that the demand of LMO is gradually reducing with improvement in the Covid situation across the country.

Credit goes to none other than our all time favourite CM @HemantSorenJMM . Hats off. pic.twitter.com/mJBFHvbgoT

"Despite several contraints including challenges posed by the two recent cyclones, Tauktae and Yaas, the railways continued its oxygen movement in the same manner with the help of its committed employees who are trained to work round the clock even during adversities to ensure fastest transportation of oxygen Express trains," said Ghosh adding that oxygen relief by Oxygen Express trains reached to as many as  15 states across the country.

In order to ensure that Oxygen Express trains reach their destantions on time these are run on high-priority green corridors, said the PRO. "All this is done in a manner that other freight operations aren't hampered," he said.