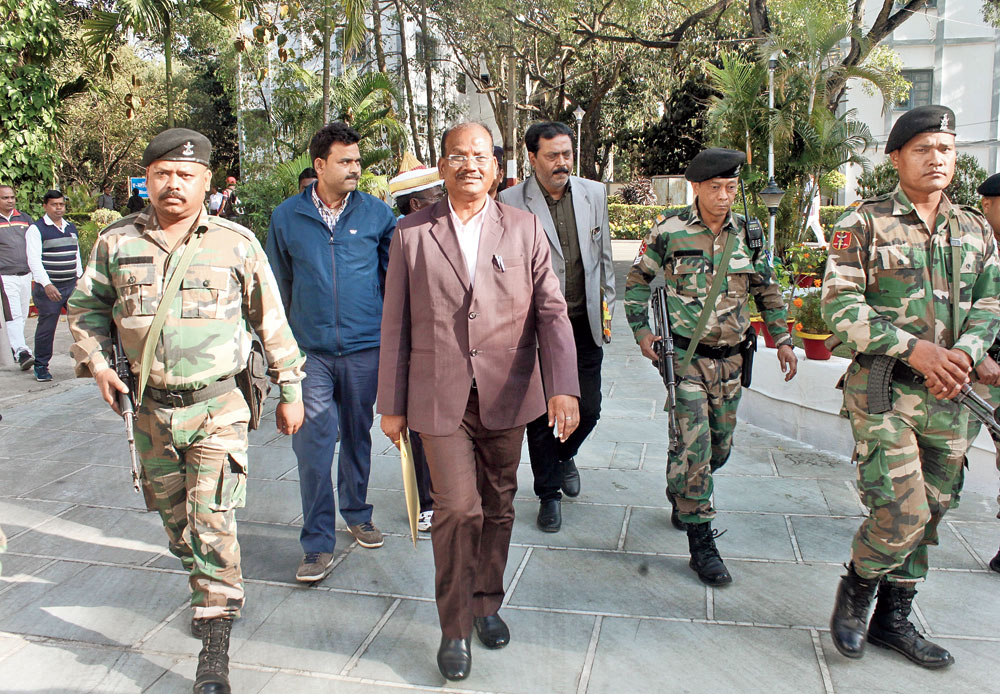 Jharkhand Assembly Speaker Dinesh Oraon on Wednesday upheld as legal the merger of six JVM MLAs with the BJP in February 2015, quashing the petition of JVM president Babulal Marandi and his MLA Pradeep Yadav that defectors be disqualified for violating the 10th Schedule of the Constitution, often referred to as the anti-defection law.

Using the term “merger” and not “defection”, Speaker Oraon said, “I don’t find their merger as illegal. I dismiss the petition seeking dismissal of their membership. I heard and recorded arguments of a battery of lawyers from the defence and petitioners and they helped me reach this conclusion under the light of the law. Copies of the judgment will be provided to parties concerned.”

The Speaker’s verdict, in one stroke, saved the ruling BJP government from the embarrassment of falling short of majority in the fag-end of its five-year term and put the very existence of the JVM under threat.

Had the Speaker scrapped the membership of six legislators, the BJP would have been left with 37 MLAs, five short of 42, the magic majority number. Even banking on its fractious ally Ajsu for survival would not have helped. The Ajsu has four MLAs.

Barely a couple of months from the declaration of Assembly election results in December 2014, the six left Marandi’s party to “merge” with the BJP in February 2015.

The six MLAs justified their action citing they were over two-thirds of the eight MLAs in the JVM and were within their rights to merge with another party without violating the anti-defection law. Turncoat MLA Janki Prasad Yadav said he had chaired the merger meeting of the six MLAs and they had submitted a “single petition” to the Speaker.

The JVM had argued the defectors joined the BJP in “two batches” and the JVM’s bylaws did not authorise the “so-called merger meeting”, said JVM lawyer Rajendra Singh. “Till we get a copy (of the Speaker’s judgment), I can’t speculate on the grounds of the verdict. But we will definitely challenge this decision before high court,” lawyer Singh added.

“The judgment confirmed the merger of the JVM with the BJP. So the JVM as a separate political party and election symbol cease to exist,” Gilua told The Telegraph.

It is a big blow to JVM chief and founder Marandi, Jharkhand’s first chief minister, whose electoral debacles in the 2014 Lok Sabha and Vidhan Sabha elections left him struggling to stay afloat politically. The loss of six MLAs left the JVM with only two, Pradeep Yadav and Prakash Ram. Marandi had lost Assembly elections from Giridih.

After the verdict, JVM workers, who had gathered in large numbers on the Assembly premises, looked dismayed. “This is a black day for Indian democracy. We strongly believe that the Speaker was under pressure of his party and the government to give a judgment favouring them,” said JVM media cell in-charge Tauhid Alam.

The court of the Speaker had fixed 97 dates for hearing. Hearing took place only on 64 days. The MLAs submitted a list of 78 witnesses but the court recorded statements of only 57. The prosecution produced eight witnesses.