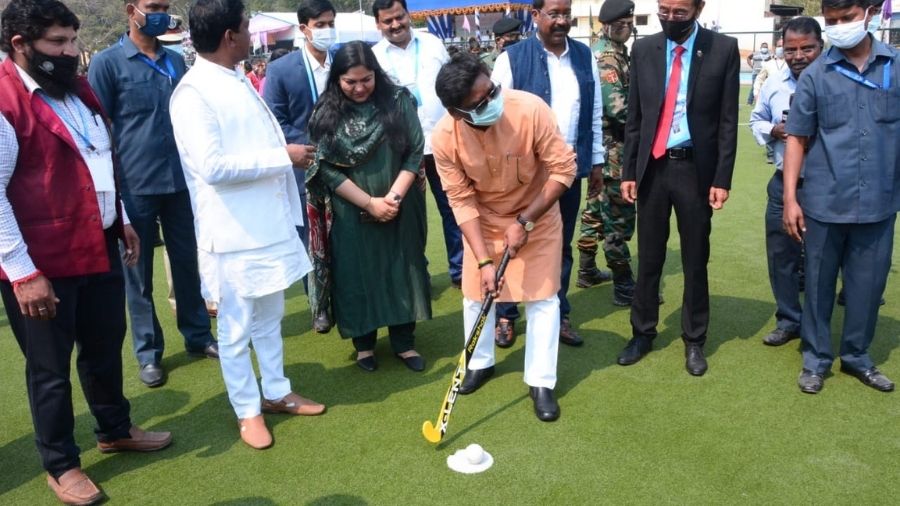 CM Hemant Soren tries to flick the ball during the inaugural ceremony of the national hockey meet in Simdega on Wednesday.
Telegraph Picture
Our Correspondent   |   Ranchi   |   Published 10.03.21, 07:12 PM

The sports department is working on plans to set up village-level clubs named after tribal freedom fighter duo Sidho-Kanho across the state to encourage talent at the grassroots levels.

Announcing the initiative on Wednesday during the inaugural ceremony of the 11th Hockey India National Women's Sub-junior tournament in Simdega district, chief minister Hemant Soren said clubs would come up in about 30,000 villages and would be funded by the government to promote sports.

“As a part of our mission to promote sports and players, our government has decided to form Sidho-Kanho clubs in about 30,000 villages in the state. Each club will be provided Rs 25,000,” he said, adding that sports and tourism are among the priority areas of his government. “We have made special provisions in our budget this year to develop these two sectors,” he added.

Simdega, a remote and under-development district of the state is touted as the nursery of hockey, churning out numerous national and international level hockey players. But it is only now that the region is hosting a national-level tournament.

CM Hemant Soren interacts with players at the start of a pool match in Simdega on Wednesday.
Telegraph Picture

Hemant also promised that Simdega would soon have a stadium with state-of-the-art facilities for players. “An Astroturf stadium which is coming up here on about 6.5 acre land will be one of the best. It is estimated to cost about Rs 18.5 crore. Besides hockey, we are also making provisions of volleyball and basketball courts. The stadium will also have a decent hostel facility,” he said, adding that the government was also seriously pursuing plans to set up a centre of excellence for hockey in Ranchi.

Hemant said that in as many as four districts—Simdega, Gumla, Khunti and Ranchi—where hockey is more popular, the sports department was working to provide  Astroturf in government schools for a better playing experience for boys and girls. “In the first phase, we have identified 15 schools in these districts where this will be done,” he revealed.

Sub-junior women's teams from 22 states are taking part in the Simdega tournament which will continue till March 18. On the first five days, the participating teams will play pool matches. The top eight teams will then battle for the title that will be decided on knockout basis. The quarter-finals  will be played on March 15 and 16 and the semis on March 16. The final will be held on March 18.

CM Hemant Soren addressing the gathering during the inaugural ceremony of a Hockey India women's meet in Simdega on Wednesday.
Telegraph Picture

Welcoming all visitors, Hemant directed the district administration to make arrangements for guided sight-seeing tours to help the visitors explore  the tourism potential of Simdega. “The district is very beautiful and has several places to visit. I had a discussion with the deputy commissioner and told him to make arrangements for sight-seeing trips on off-days,”Hemant said amid a rousing applause from players.