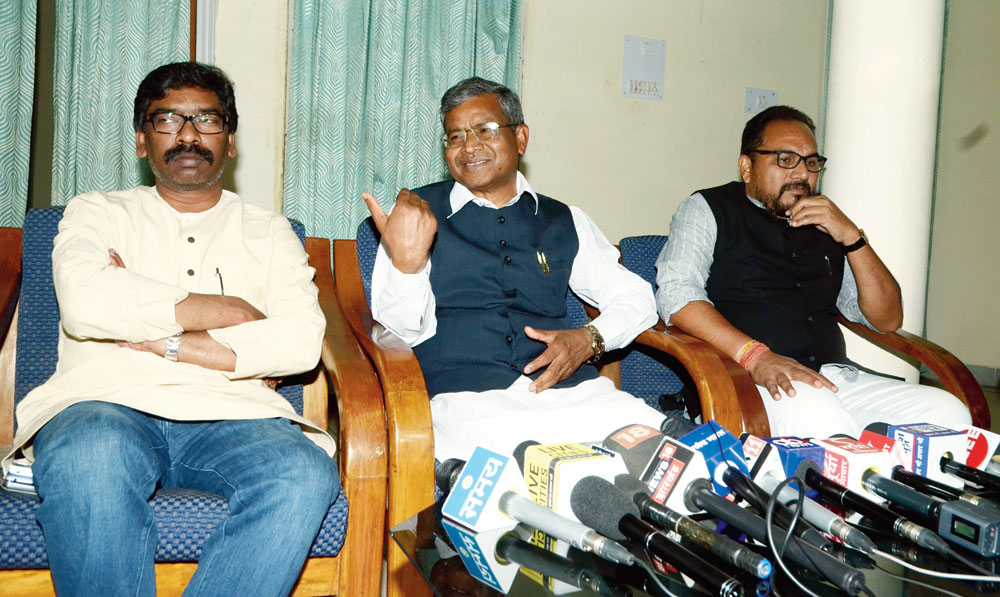 JMM working president Hemant Soren met JVM chief Babulal Marandi on Monday and decided to impress upon the Congress to finalise the Opposition seat-sharing for the Lok Sabha elections within a week so that they could launch their campaign effectively.

Hemant, who met Marandi at his Morabadi residence in the presence of senior JVM leader Pradeep Yadav, said it was imperative the people of Jharkhand got to know about the Opposition alliance.

“As far as the Opposition alliance in Jharkhand is concerned, we should take steps to give a final shape to it within a week or two. I will speak to the Congress and the RJD in this regard,” Hemant said.

After the meeting, Marandi spoke to the media. “We discussed the format of the Opposition’s alliance in Jharkhand and mutually agreed that Hemant Soren will speak to the Congress leadership so that a final decision is taken in a week. We have set a target to win all 14 parliamentary seats for which we have to plan a joint campaign,” he said.

The Opposition alliance has been formed in Jharkhand with the understanding that the Congress will contest seven Lok Sabha seats with the JMM, JVM and RJD contesting four, two and one seat, respectively. While the Congress and Rahul Gandhi will lead the fight in the parliamentary elections, the JMM and Hemant Soren will lead the Opposition campaign for the Vidhan Sabha polls.

Disagreement has already surfaced over the Godda seat which the JVM wants from the Congress at all costs. But the Congress is under pressure from former Godda MP Furkan Ansari and his MLA son Irfan, besides other leaders of Santhal Pargana, not to part with Godda.

“The Congress can negotiate a seat sharing deal with the JMM for Odisha but it has no time for Jharkhand. Marandi has asked Hemant to take up this matter,” said a JVM leader.