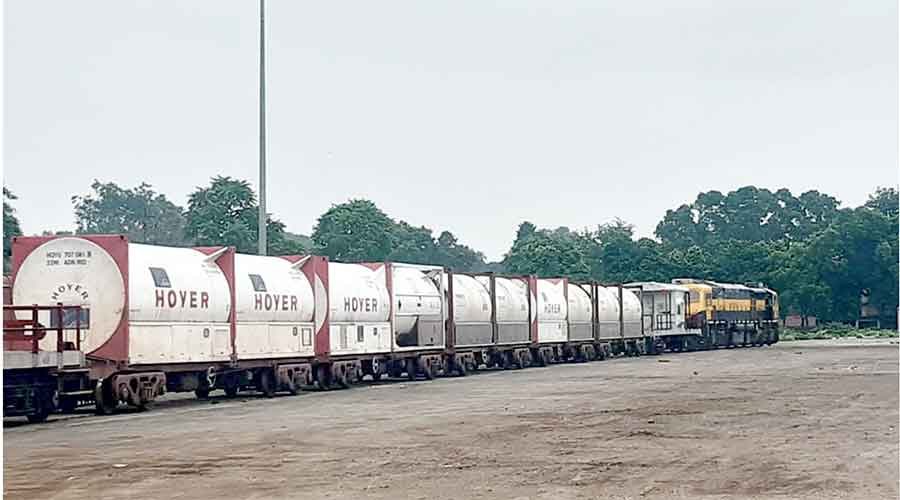 The fifth Oxygen Express train ready to leave for Bangladesh from Rourkela railway station on Wednesday
The Telegraph picture
Our Bureau   |   Published 04.08.21, 11:14 PM

The train will cover a journey of around 700km to reach its destination in Bangladesh from Rourkela.

Notably, the first Oxygen Express train was sent to Benapole in Bangladesh, originating from Tatanagar on July 24 for the treatment of Covid affected patients in the neighbouring country.

Till now, four Oxygen Express trains have been sent to Bangladesh from Tatanagar, each carrying 200 tonnes of Liquid Medical Oxygen (LMO).

With the despatch of Wednesday’s train from Rourkela, altogether five Oxygen Express Trains have been sent to Bangladesh from SER jurisdiction with total 983 tonnes of LMO.

In order to meet the growing demand of oxygen for treatment of Covid affected patients, the South Eastern Railway has been running Oxygen Express trains since April 23 to different parts of the country to ensure quick transportation and smooth supply of oxygen.

As the Covid cases reduced and demand for Liquid Medical Oxygen witnessed a fall, the running of Oxygen Express trains within the country was stopped at the end of June.

Bangladesh is the first overseas country where the consignment of Liquid Medical Oxygen was sent for treatment of Covid patients.

Residents fill water from a tank due to water crisis at Katras mor in Jharia on Wednesday.
Shabbir Hussain

Dhanbad: Water- water everywhere not a drop to drink. The age old adage seems to be true for more than five lakh residents of Jharia who face water crisis during every monsoon season due to rise in water level of river Damodar.

Weeds being carried along with the strong water current during monsoon block the inlet pipeline of the intake well of Jamadoba based water treatment plant of civic body Jharkhand Mineral Area Development Authority affecting the water treatment work and resultant supply of treated water.

The latest water crisis which arose six days ago however is coupled with a leakage problem in the main water supply pipeline around 200 meters away from the treatment plant further delaying the resumption of water supply.

“No initiative has been taken by the district administration or JMADA to take direct connection for Jamadoba Water Plant from DVC to ensure continuous water supply despite the fact that more than five lakh residents are dependent on it,” said Anup Sao, former councilor of ward number 37 of Jharia who has staged agitation against the perennial water crisis of Jharia several times.

Pankaj Kumar Jha, Sub Divisional Officer of Water Supply Division of JMADA, said, “We have completed the pipeline repair work and water supply for Digwadih, Jorapokhar etc is likely to resume by tomorrow while the inlet pipeline blockage has already been cleared much earlier.”

The court has also fined Rs 1 lakh on the accused. The trial related to the case was completed within six months after examining all the nine witnesses, said special public prosecutor S.K. Jha.

The incident occurred with the 17-year-old girl after her parents were unable to return from Uttar Pradesh during the lockdown imposed in March to June in 2020.

The court held the accused Kamal Ansari, 29, guilty of the crime under section 6 of POCSO (Punishment for aggravated penetrative sexual assault) and awarded him 30 years RI.

The victim in her complaint had mentioned that her parents had gone to Moradabad (Uttar Pradesh) to finalise her marriage but were unable to return due to the lockdown. In their absence, the victim and her siblings were facing problems with food in the house, so her parents, called her step-maternal uncle to take care of them.

Following her parent’s request, Ansari came and took them to their house where he lived with his mother, wife and children. Jha said, “Victim had stated Ansari intoxicated her and raped her. He repeated the offence for two months. He also threatened her with dire consequences.”

Jamshedpur: The much-hyped cable-stayed bridge project at Govindpur locality of the steel city was shelved on Wednesday.

The bridge project which was modelled on Calcutta's Vidyasagar Setu and was being considered to be a signature bridge for this region was shelved despite the spade-work starting for the ambitious project.

The proposed cable-stayed bridge was supposed to be set up over the picturesque Hudco lake in Govindpur which is located at the eastern fringe of the steel city and about 12 kms away from the heart of the city.

The main purpose behind setting up the cable-stayed bridge was to ease the vehicular traffic congestion, especially the industrial vehicle congestion from the city.

Executive engineer, Road Construction Department, Ramvilas Sahu confirmed the shelving of the project, but did not give any specific reason behind it.

"The cable-stayed bridge project in Govindpur was shelved today by the state government. It is not known whether this project will be executed in future or not," said Sahu to The Telegraph Online.

The executive engineer pointed out the spade-work for the Rs 138 crore project had stopped since last year due to the pandemic, but now it has been shelved. He, however, informed that the work for the 13-km-long road project linking Anna Chowk in Govindpur to NH-33 at Pipla is on.