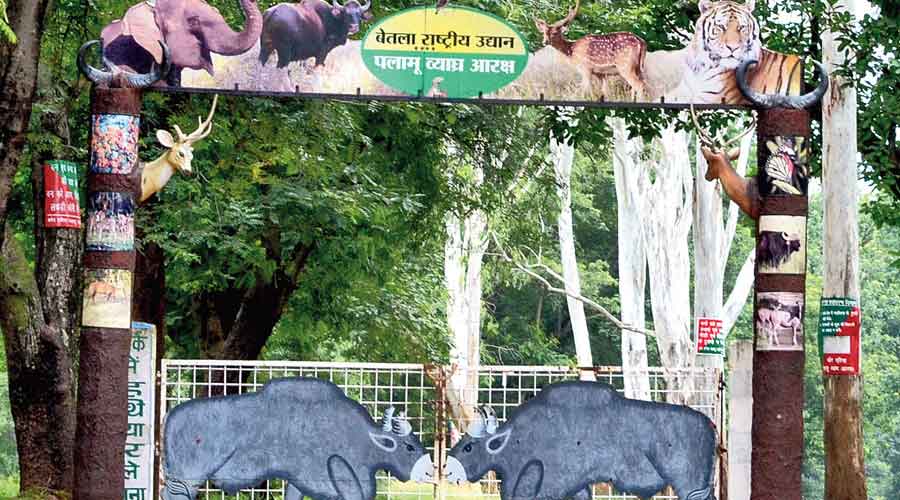 Daltonganj: A lone male elephant said to be between 30 and 35 years has destroyed the check post of the famous Lodh Falls in the Palamau tiger reserve.

Sources said the lone elephant has destroyed two houses one each at Mirgi and Medhari villages under the Mahuadarn range.

The elephant made huge holes in the kachha walls of the houses of the victims namely Sandip Lohra and Madhnu Birjiya.

Sources said the inmates of the two houses were asleep when the attack occurred.

The distance between the Lodh Falls and Daltonganj based directorate office of the Palamu tiger project is 118 km. The incident occurred in the south division of the tiger reserve.

He said the tiger reserve is closed for visitors due to the Covid pandemic and there was no cash in the check post of the Lodh Falls when the elephant destroyed it.

Mukesh Kumar said this elephant which comes from Chhatisgarh stays in the Mahuadarn range for two to three days and then retreats through the bordering village of Champa.

The Mahuadarn range officer Brinda Pandey said the elephant has returned to Chhattisgarh.

Vaccination of the 18 to 44 age group will resume in the district from June 3 and the prospective beneficiaries can carry out the slot booking for vaccination after 12 noon of June 2.

Dhanbad Deputy Developement Commissioner Dasrath Chandra Das said that the vaccination for 18+ will be carried out at altogether 27 centres, including 11 in Dhanbad Sadar; four at Jharia; three at Baliapur; two each at Topchanchi, Baghmara and Govindpur and one each at Nirsa, Purbi Tundi and Tundi.

The vaccination drive was suspended in Dhanbad for a week due to lack of sufficient stock.

Dhanbad Deputy Commissioner Uma Shankar Singh said that the cylinders had been provided as per the corporate social responsibility work by MPL and added some of these cylinders will be transported to different Covid Treatment centres through Sanjeevani vehicles.

Hazaribagh: Two oxygen cylinders which were stolen from Hazaribagh medical college and hospital were found from the official residence of civil surgeon Sanjay Jaiswal on Tuesday.

Oxygen cylinders were found missing from the health hub after which a special task force was constituted to nab the culprits. Police has recovered maximum of the cylinders.

Superintendent of police Karthik S said they are very near to solve the case after the arrest of a few individuals involved in the case.

Mahto was carrying a reward of Rs 5lakh on his head and was wanted in 72 naxal cases in Giridih, Dhanbad and Bokaro.

SP Giridih Police Amit Renu said, “Anti-naxal search operations are being conducted regularly in Parasnath area as a joint effort with CRPF and SAP and has an important role in the surrender of Nunuchand.”

Mahto was involved in an incident where a vehicle was blown up between Purnanagar and Pandidih under Pirtand police station area killing five SIS security persons.

Residents gathered at the accident spot in Bokaro.
The Telegraph picture

Bokaro: An employee of Bokaro Steel Plant and his son died on the spot as the motorbike which they were riding collided with a car near a railway crossing in Sector 11 under Harla Police Station on Tuesday.

Police said the deceased have been identified as Babu Chand Mahto, 56, and his 32-year-old son Prakash Chand Mahto. They were residents of Umbratand village situated at Telmochu. Mahto was a senior operator in BSL plant while his son was in a private company that works inside the plant. A police officer said that Prakash was driving the motorbike when the Swift car collided with it.

After the collision, Prakash fell on road while the car dragged the motorbike and Mahto by a few meters. They both died on the spot. However the car’s driver managed to flee from the spot, but its number plate was found lying. Their dead bodies were sent for post-mortem.