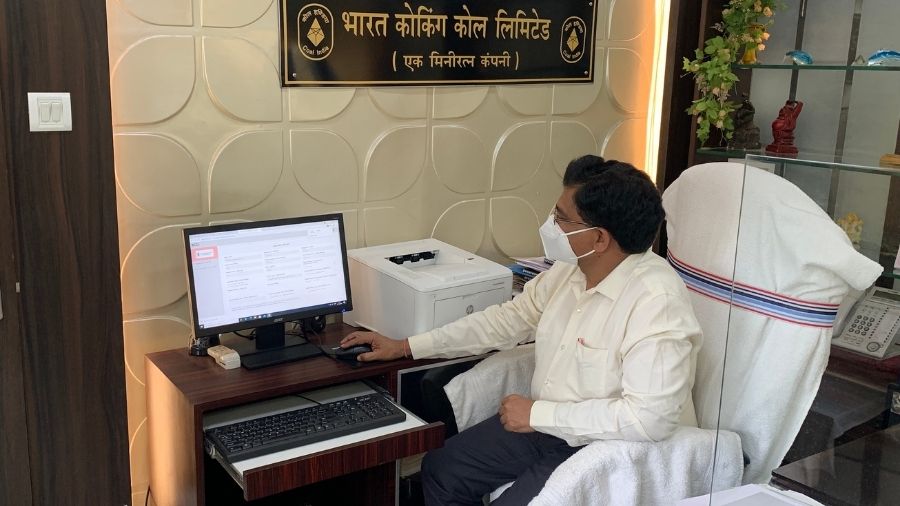 Dhanbad: Director (Personnel) of Bharat Coking Coal Limited (BCCL), P.V.K.R.M. Rao on Tuesday launched a mobile/web app for addressing complaints of the staff at the residential quarters as well as officers of the company.

Rao said that the app, a joint initiative of the administration and systems departments will gradually be made applicable for all other departments of BCCL also.

The employees can upload any complaint with their regard to their residential quarters using the app. The complaints would be addressed in a time bound manner, Rao said.

One of the trucks damaged by extremists burns on the Mandar-Laranga Road in Tandwa on Monday night.
Picture by Vishvendu Jaipuriar

Chatra: A group of armed men, whom sources identified as extremists, set five trucks on fire late Monday night at the Mandar-Laranga Road in Tandwa.

Reports confirmed that the miscreants were extremists of the Tritiya Sammelan Prastuti Committee(TSPC).

Sources said a group of 25 to 30 extremists waited on the road for trucks to come and stopped five of them to pull their drivers and cleaners out, after which they set the vehicles on fire with diesel. Before leaving the scene, one of the gutted trucks was overturned.

The trucks, all belonging to the Ma Ambey coal company, were carrying coal to Piparwar railway siding.

On April 15, members of the same outfit had set ablaze two coal carrying trucks. The incidents are being perceived as attempts to pressurise businessmen to give money to the outfit.

Police said a probe was launched into the incident.

Bokaro: The District Legal Services Authority (DALSA) have come forward for Bokaro residents, arranging medicines and consultation for them amid a surge in Covid-19 cases in the district, and circulated numbers among the public for calling when they need.

It will have officials designated by the Deputy Commissioner, doctors nominated by civil surgeons, paralegal volunteers, retainer advocates and paramedical staff with necessary medicines and oximeters.

A volunteer donates blood at a camp set up by Marwari Yuva Manch office in Purana Bazar, Dhanbad, on Tuesday.
Picture by Gautam Dey

Dhanbad: Activists of the Dhanbad unit of Marwari Yuva Manch on Tuesday organised a blood donation camp at Ratanji Road in the Purana Bazar locality of Dhanbad, to resolve the blood crisis in the district.

As many as 26 units of blood were donated during the campaign on the day.

Srikant Agarwal, convener of the organisation said, “In the prevailing situation, when the blood banks of the district are facing a crisis as vaccinated people cannot donate, we organised the donation camp today to help the centres.”

Notably, a person who has taken the Covid-19 jab, cannot donate his or her blood for up to 28 days.

Bokaro: Deputy Superintendent of Bokaro Sadar Hospital Dr. Renu Bharti was on Tuesday removed from her post by Deputy Commissioner of Bokaro Rajesh Singh, on grounds of negligence in treatment of Covid-19 patients.

The order said Bharti can be deputed or posted somewhere else on Covid duty by the civil surgeon as per his wish.

It is mentioned that Bharti was showcaused by the DC on Saturday and was asked to justify her stand within 24 hours. She was also asked why an FIR should not be launched against her under relevant sections of the Disaster Act 2005, and why her medical license should not be cancelled

Singh said, “Bharti was found ignorant towards Covid-19 patients. She was not coming to duty on time. In a joint inspection of Civil Surgeon-cum-Chief  Medical Officer, A K Pathak and SDO it comes to light that Bharti was not seriously operating 30 bed Covid ward in the Sadar Hospital. Covid patients and their families have complained about negligence.”