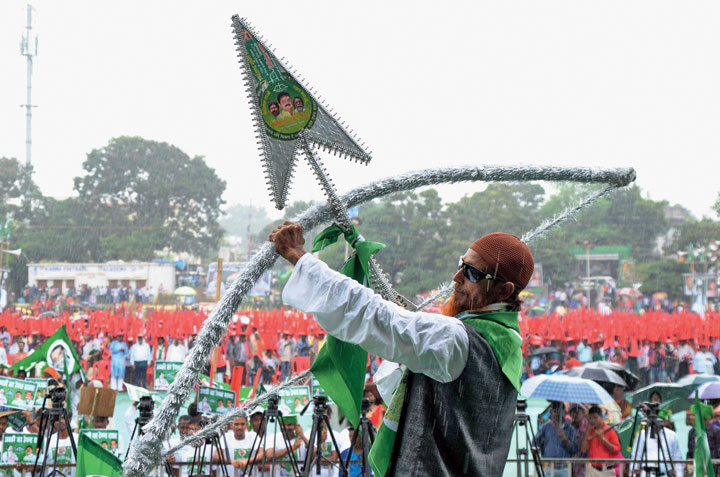 A JMM supporter holds a bow and arrow, the party’s poll symbol, at the Badlav rally on Harmu ground in Ranchi on Saturday
Manob Chowdhary
Our Correspondent   |   Ranchi   |   Published 19.10.19, 07:04 PM

Rain dampened the mood somewhat at the JMM’s Badlav (change) rally on Saturday at the Harmu ground in the capital in front of the state BJP headquarters where leader of Opposition Hemant Soren blew the poll bugle.

The rally started at 12.30pm when around 10,000 party workers gathered at the ground to hear leaders including working president Hemant and party patriarch Shibu Soren. Hemant took the stage around 2.30pm and half-an-hour after he started his address the rain began. Within five minutes, people started running for shelter. Hemant, however, continued his address.

“This rally is a departure call for chief minister Raghubar Das and his party from power. They always cheated people of Jharkhand and their anti-tribal mindset has been exposed,” Hemant said.

He said if voted to power his party would enact legislation to protect land belonging to the people of Jharkhand. “We will bring such a law where even the landless will get land for their homes.”

He promised 50 per cent reservation to women in government jobs, and vowed to improve the power situation.

“My government will end dependency on DVC for power supply and we will ensure minimum 20-hour supply even in villages. In the villages, consumption of power up to 200 units per month will be free. Jharkhand is a mineral rich state. Our resources are exploited for development of other states and companies but we are given nothing. We will enact a law under which state and companies that utilise our resources will have to compensate us in terms of power supply and other facilities,” he said.

He promised to create five lakh jobs and provide houses to the homeless with kitchen and toilet.

He said that government contracts worth Rs 25 crore would be reserved for the people of Jharkhand and his government would bring a law for 75 per cent reservation for local residents in the private sector.

He said that the JMM wants 28 per cent reservation to ST, 27 per cent to OBC and 12 percent to SC in Jharkhand.