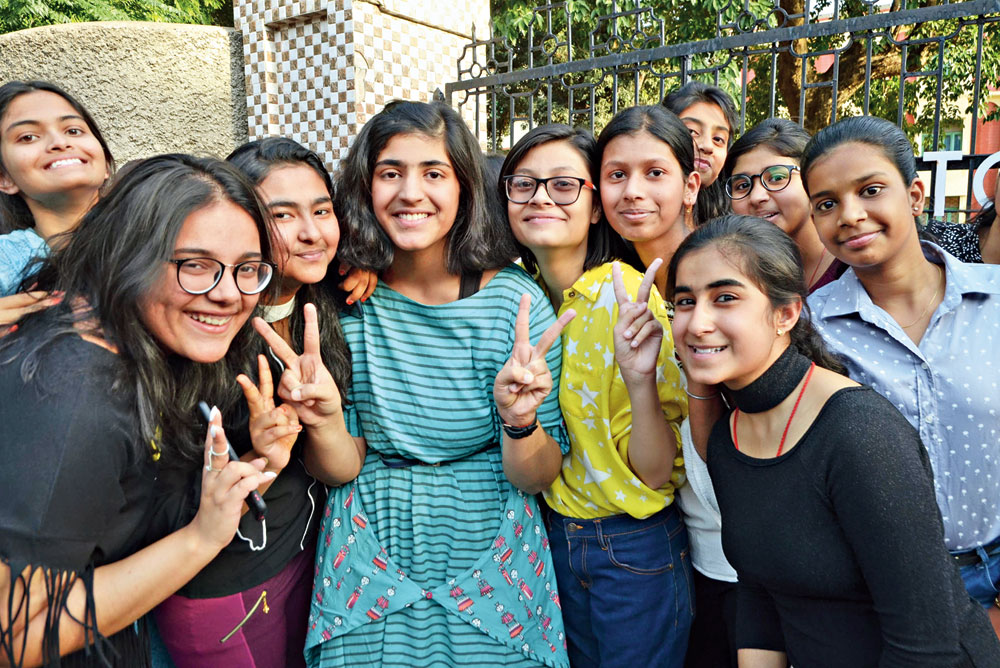 We did it! Nandani Choudhary with other students flash the victory sign at Loreto Convent in Ranchi after Class X results were declared on Tuesday.
Picture by Prashant Mitra
Our Correspondent   |   Jamshedpur   |   Published 07.05.19, 06:43 PM

Three students bagged 99 per cent marks to top the ICSE exam in the state on Tuesday. The ISC results were even better — two Jharkhand teens scored a whopping 99.75 per cent, just a shade below the two national toppers who didn’t give away even a fraction.

In Jharkhand, 11,968 Class X students from 105 schools and 4,824 Class XII students from 48 cradles appeared for the ICSE and ISC exams, respectively.

“We expected Vedika to become the city topper, but being No. 1 in the state topper came as a bonus for all of us. We knew she would make us proud. We are elated,” said Priti Sinha, principal of Gulmohur High School.

The ICSE exams were conducted between February 22 and March 25. The ISC (theory) exams started from

February 15 and concluded on April 4.

“I scored 98 per cent in ICSE. My relatives, friends and even the person at the photocopy shop advised me to opt for science. But I want to pursue economics honours from University of Delhi, and thankfully, my parents are supporting me,” said Srishti Vaidya, who wants to become an IAS officer and admires Tina Dabi, who stood first in the 2017 UPSC exam.