Affirmative nod from the state after letter from Larson & Toubro; MOU to be signed soon 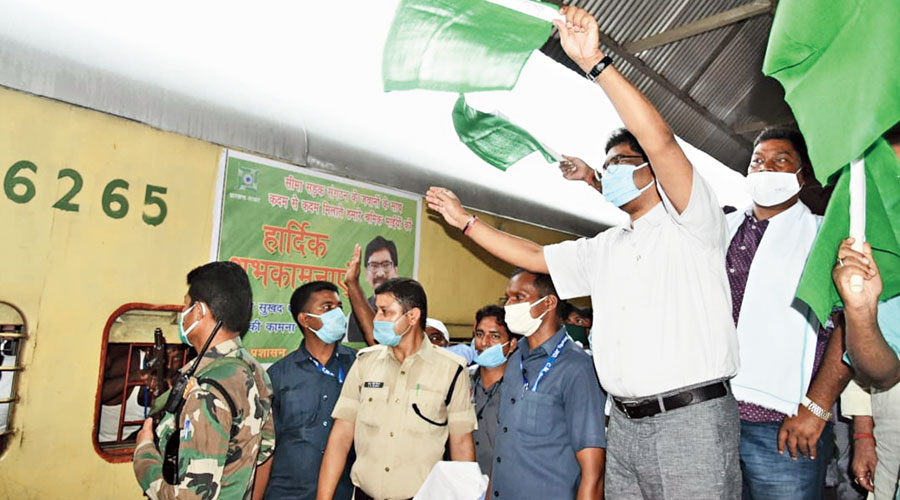 The Jharkhand government, which has already sent workers from the state for road construction projects along the India-China border in June, is planning to send its workforce for another defence project at a naval base in Andhra Pradesh later this month.

Sources in the chief minister’s secretariat said the Jharkhand government would be signing an agreement with Larson & Toubro soon to send 3,000 workers for a civil infrastructure project at the news INS Varsha naval base near Visakhapatnam. The project involves building underground pens to house nuclear submarines, making them difficult to detect.

“The government would be signing an MoU (memorandum of understanding) with L&T to provide 3,000 workers for their project in Visakhapatnam. We have already sent the draft MoU to the general manager (head finance and administration) L&T construction project office, Somnath Iyer, at Visakhapatnam for review.

“As per informal communication, they will be coming to Ranchi for signing the MoU this month. It would be the second such MoU signed, after the one with BRO (Border Roads Organisation, amid the Covid-19 pandemic,” the source said.

A similar agreement was signed with the BRO to send 1,648 workers from Dumka last month to Leh and Ladakh to ensure compliance of all labour and workforce norms and safeguard workers’ rights, interests, health and social security.

The workers leave for Ladakh from Dumka railway station in June.
Bhola Prasad

“L&T had written to the state government in mid-June requesting permission for mobilisation of workmen from Jharkhand as they were facing a workforce crisis due to the lockdown. They expressed the need for 1,000 workmen for civil construction at the strategic naval base in Visakhapatnam,” the source said.

The state labour department, after perusing the offer in detail and in consultation with chief minister Hemant Soren, replied in the affirmative to the company on July 2.

The letter by principal secretary, labour, Rajeev Arun Ekka, who is also principal secretary to the chief minister, granted permission for mobilisation of workers from the state for the defence project, but advised L&T to register as the principal employer under the Inter-State Migrant Workmen Act, 1979.

“We are committed to the welfare of our workers and our tribal brothers. We are ready to send our workers in the interest of national security without compromising on their honour, welfare rights, benefits and dignity. We hope to sign the MoU soon,” chief minister Soren, who is in home quarantine in Ranchi, said.

L&T has been involved for the past few years in creating a one-of-its-kind naval alternate operating base (NAOB) near Visakhapatnam.

The NAOB is India’s answer to similar infrastructure developed by China in the Hainan islands –– the closest large naval base in the South China Sea. The project is considered vital as India expands its fleet of nuclear-powered and armed submarines.