She has been sent to Birsa Munda Central Jail, Hotwar after the ED took her on remand for five days 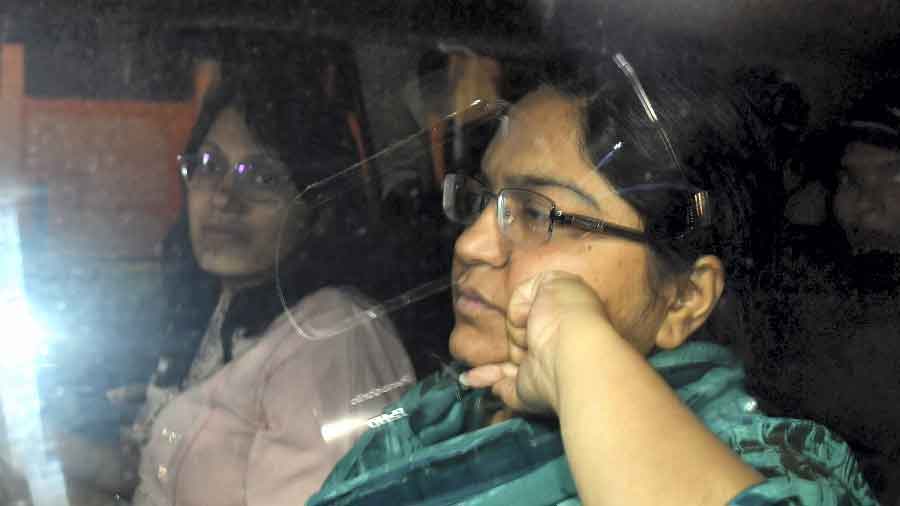 A day after being arrested in connection with a money laundering case and remanded to the custody of the Enforcement Directorate, the Jharkhand government on Thursday suspended state mining secretary Pooja Singhal, an official said.

The ED had produced the 2000 batch IAS officer before a special Prevention of Money Laundering Act (PMLA) court of Prabhat Kumar Sharma after two consecutive days of questioning by the central probe agency on Tuesday and Wednesday.

She was sent to Birsa Munda Central Jail, Hotwar, on Wednesday night after the ED took her on remand for five days. "Pooja Singhal has been suspended with immediate effect under the provisions of All India Services (Discipline and Appeal Rules, 1969), the official said.

A notification from the Personnel, Administrative Reforms and Official Language Department of the Jharkhand Government read "In the light of the arrest under Section-19 of Prevention of Money Laundering Act (PMLA) 2002, Smt Pooja Singhal, IAS (Jh: 2000), Secretary, Industries Department, Jharkhand (Additional Charge Secretary, Mines and Geology Department, Jharkhand and Managing Director, Jharkhand State Mineral Development Corporation Ltd Ranchi by ED... under Rule-3(3) of the All India Services (Discipline and Appeal) Rules, 1969, is suspended with immediate effect".

Singhal will be paid subsistence allowance during the period of suspension under Rule-40 of the All India Services (Discipline and Appeal) Rules, 1969, the notification mentioned.

Meanwhile, the doctor who examined the IAS officer under ED remand said her blood pressure is fluctuating and she is experiencing bouts of vertigo.

"She is nervous and there is complaint of slight vertigo... Her blood pressure is fluctuating ... her diastolic blood pressure is high, said Dr R K Jaiswal. Reacting to the arrest, Jharkhand Chief Minister Hemant Soren had said Wednesday, the state government "will initiate whatever legal action it has to take in this subject".

He said the alleged irregularities "occurred during BJP tenure and that should be probed. It was during the BJP tenure that a clean chit was given to her in 2017, the CM had said.

All those who gave her the clean chit should be probed. You (BJP) make her do the wrong and you (also) give her a clean chit, Soren had said. The money laundering investigation against Singhal and others pertains to a case in which former Jharkhand government junior engineer Ram Binod Prasad Sinha was arrested by the agency on June 17, 2020, from West Bengal.

He was booked under the PMLA on the basis of state vigilance bureau FIRs against him. Sinha had told the ED that he paid five per cent commission (out of the defrauded funds) to the district administration.

The money laundering case against Singhal is linked to alleged embezzlement of Mahatma Gandhi National Rural Employment Guarantee Scheme funds in the state.

The ED had alleged, irregularities were found in the accounts of the scheme while she served as the deputy commissioner and district magistrate of Chatra, Khunti and Palamu between 2007 and 2013. The statement of her businessman husband, Abhsihek Jha, too has been recorded in the case on at least on three occasions, the sources said.

This is the second arrest in this case after Suman Kumar, a chartered accountant and financial advisor allegedly linked to the couple, was held by the ED on May 7, a day after the agency raided their premises and some other locations in different states.

The agency, during the May 6 raids, seized over Rs 17 crore in cash from the premises of Suman Kumar. The total cash seizure in this case including all locations is Rs 19.31 crore, officials had said.

The ED had claimed, in a remand note presented to the court, that Singhal and her husband received "huge" cash deposits -- to the tune of Rs 1.43 crore -- over and above her salary in their accounts, during the period she faced charges of irregularities while being posted as the DM of various districts in the state.

The agency also told a special PMLA court in Ranchi that the IAS officer allegedly transferred Rs 16.57 lakh from her "personal account" to those controlled or owned by Kumar.

The agency is also looking at the business transactions and other finances of a multi-speciality hospital based in Ranchi which is allegedly managed by Singhal's husband.

ED officials had earlier said they seized a number of "incriminating documents that indicate political and higher bureaucracy links with alleged illegal mining activities in the state" during the raids.