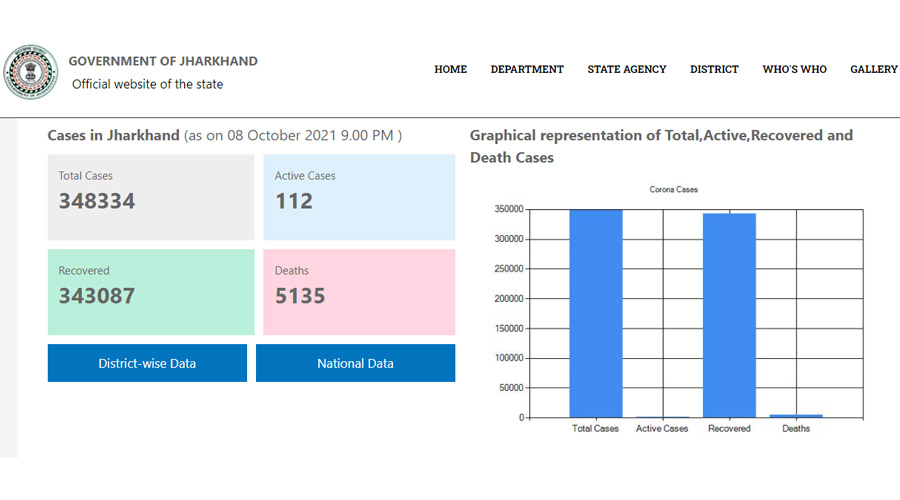 The Covid-19 dashboard of the official website of Government of Jharkhand has not been updated since October 8 owing to the ongoing strike of contractual workers in National Health Mission (NHM), who are responsible for compiling data and sharing it with the concerned departments every day.

“Since contractual workers in  districts have also joined the strike, the process of compilation and sharing of Covid-19 related data has been hindered,” said a contractual worker at NHM involved in data management.

“Mostly NHM workers are involved in data management, so the delay in updating Covid data on Jharkhand government’s website could be due to their strike,” said state epidemiologist Dr Praveen Kumar Karn. “However, we have been sending updated data to the Centre regularly,” he added.

NHM contract workers went on an indefinite strike on October 10 to demand reinstatement of state programme manager Jwala Prasad, who was terminated on charges of alleged financial irregularities. Under the banner of Jharkhand Health Employee Welfare Association (JHEWA), contractual healthcare workers including data managers, Ayush doctors and other medical staff have joined the strike also demanding the implementation of an HR policy and introduction of paid leave in exchange of extra work done on Saturdays and Sundays during the Covid-19 crisis.

The strike entered its 14th day on Sunday, and continued to hamper several other activities run under NHM across the state. According to the striking healthcare workers, all the routine immunisation programmes and the various campaigns run for women and children in the state have been hit because of the strike.

The striking contractual workers have also accused senior NHM officials of misbehaving with them and not paying salary to some of the workers for months.

Meanwhile, some Auxiliary Nurse Midwives (ANM) associations have extended their support to the striking contractual workers, a development that is likely to affect the ongoing immunisation drive against Covid-19 in the state.

“If NHM authorities do not agree to our demands, then ANMs will also join us in a day or two,” said another striking contractual worker, adding that many contractual healthcare workers who work on the field have not received payment for several months.

However, NHM authorities have decided not to reinstate the terminated state programme manager at any cost. They have verbally agreed to other demands of the striking contractual workers.