Counting to begin at 8 am, trends to pour in an hour later 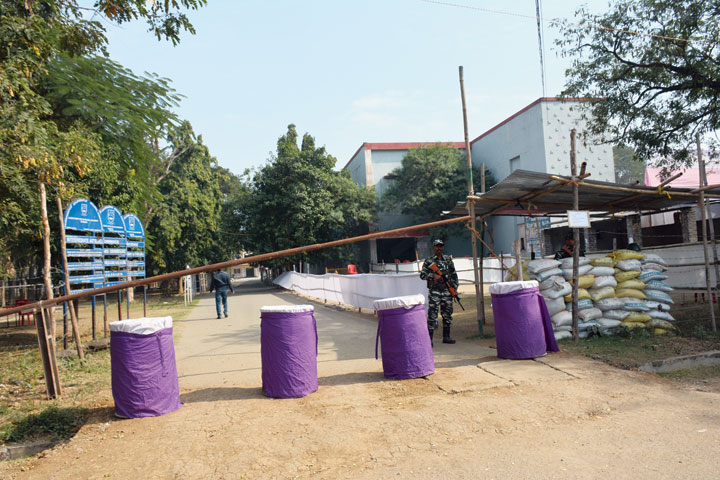 Barricades on Sunday at Jamshedpur Co-operative College in Bistupur, the venue for counting Jamshedpur East votes that would decide the fate of Raghubar Das.
(Bhola Prasad)
Our Correspondent   |   Ranchi   |   Published 22.12.19, 09:10 PM

As candidates and leaders of political parties wait for the D-Day with bated breath, the Election Commission is busy reviewing the security arrangements to ensure counting of votes in 81 Assembly seats in a transparent manner on Monday.

He said the counting would begin from 8am and the trends will start pouring in from 9am.

In Jharkhand, polling was held across 29,464 booths.

In a statement issued by the Election Commission, the results will be available on http://results.eci.gov.in.

People can also get real-time update on their mobile phones through the Voter Helpline app.

Choubey said Jharkhand Police personnel as well as CRPF jawans would be deployed in large numbers at all counting centres.

“We have foolproof and elaborate security arrangement in place.

However, I can’t disclose the security details,” Choubey added.

“Candidates can nominate two of their representatives per table to ensure that counting is being conducted in a fair manner. First, all postal ballots will be counted. Micro observers at the counting table will supervise the entire process,” Jha said.

He said the result of each round of counting will be declared after permission from the Election Commission.

No mobile phone will be allowed inside the counting centres.

In Ranchi, counting will be held at Pandra Bazaar Samiti where the district administration has made security and logistic arrangements.

“At Pandra Bazaar, counting of seven Assembly seats — Tamar, Silli, Khijri, Ranchi, Hatia, Kanke and Mandar —will be held. Guidelines of Election Commission of India will be followed and we have made sufficient security arrangements,” said Ranchi deputy commissioner Rai Mahimapat Ray.