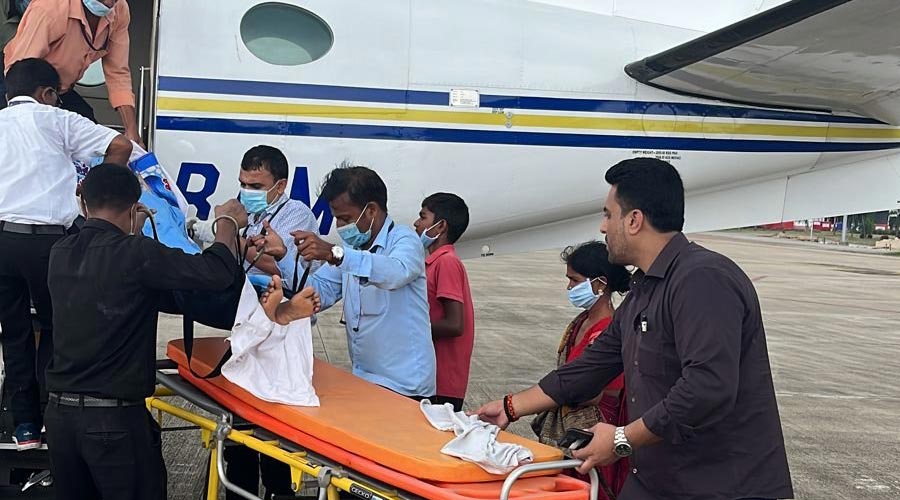 A 17-year-old girl from Jharkhand's Chatra district, who sustained serious burn injuries in an acid attack, was on Wednesday airlifted to All India Institute of Medical Sciences (AIIMS), New Delhi for better treatment, officials said.

The minor was attacked on August 5 and undergoing treatment at Rajendra Institute of Medical Sciences (RIMS), Ranchi.

A medical board of the state government-run hospital referred her to AIIMS, New Delhi on Tuesday after examining various test reports, an official of the health facility said.

"The victim was shifted to Delhi via air ambulance. She requires specialised treatment," he said.

Chief Minister Hemant Soren had directed officials concerned to extend all support to the victim and her family.

The government has already provided Rs one lakh to the victim's family as assistance, a statement from the Chief Minister's Office said.

"Sister Kajal has been sent to Burn Ward of AIIMS Trauma Centre, New Delhi. Praying to God that she returns soon after recovery," Soren retweeted a post by state Health Minister Banna Gupta.

The victim's mother, who was also injured in the attack, said, "Stringent punishment should be given to the accused who resides around 2.5 km from our village Dhebo. He was harassing my daughter for the last two-three months."

The accused has been arrested and legal procedures are on, Chatra Deputy Commissioner Abu Imran said.