First ever initiative to find homes for strays in steel city 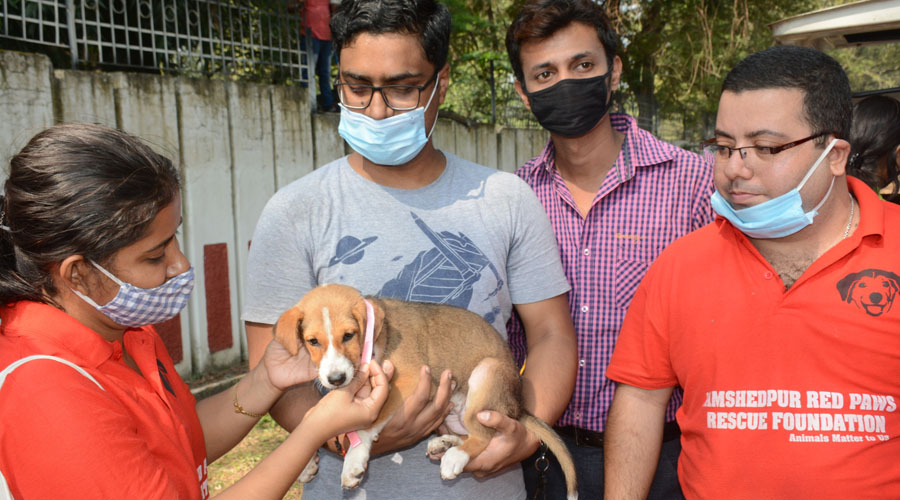 For the first time, a stray pup adoption camp was organised in Jamshedpur to motivate people to adopt Indian stray puppies who otherwise face the wrath of busy streets or merciless humans. The Jamshedpur Red Paws Rescue Foundation organised the first-ever stray pup adoption camp at the Circuit House Area just opposite the Durga Puja ground on Sunday with a positive response. With more than 10 volunteers, the Jamshedpur Red Paws Foundation came up with 30 pups that were lesser than three months out of which 22 got adopted on the first day.

Animal lovers and animal rights activists do face a lot of problems when it comes to the adoption of Indian stray puppies. Without a proper animal shelter in the city, people most of the time fails to arrange for homes for these pups. The adoption camp thus was a possible way towards ensuring that people do adopt them which will be followed by proper monitoring.

The adoption of pets required submission of ID proofs, address proofs, and contact details which will help the organisation and volunteers to pay surprise visits to check the condition of the pets later. The foundation has also taken the responsibility to provide anti-rabies vaccines to the adopted pets every year. De-worming medicines were also administered on Sunday post the adoption process along with proper counselling.

“I had this idea in mind as we face a lot of trouble while arranging homes for strays but I was not very confident if this will work. The first time response was overwhelming. However, we have only allowed adults to adopt and not children. There were a lot of children who wanted to take the pups home but this is a perennial problem as later if the family denies keeping it, they find their way again on the busy streets and forage for food,” said Aniz Patel, founder of the Jamshedpur Red Paws Rescue Foundation.

Stray pups that were up for adoption at C.H. Area in Jamshedpur on Sunday.
Pic by Bhola Prasad.

The foundation is now aiming to organise such camps regularly for better awareness among the denizens of the city. Those who adopted were happy as they took home those bundles of joy.

“The best thing with Indie pups is the easy adaptability to our climate and low maintenance which is not the case with breeds of the western world. They too can be excellent guard dogs and can love you till the last breath of their life. I had no plans to adopt but as soon as I saw them by the roadside, it reminded me of my grandfather who kept feeding strays and spoke about their selfless love and loyalty. So, I adopted one who is going to be at my farm in Galudih near Ghatshila,” said Alok Sikandh, an M.Tech student who resides in C.H. Area.