ITI apprentices on three-day dharna against BCCL in Dhanbad

Trainees demand jobs at PSU which is depending on 'outsourcing' workers 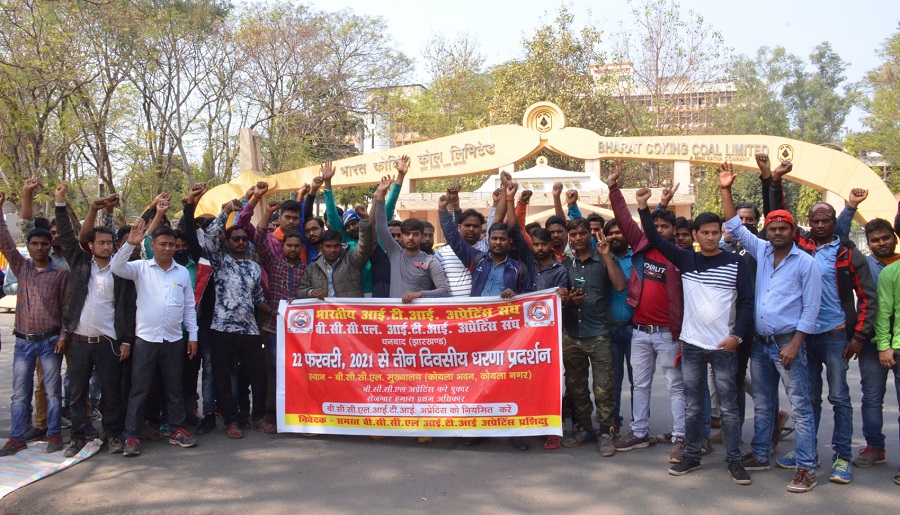 Over 100 ITI apprentice trainees of Dhanbad launched a three-day dharna at BCCL headquarters in the Koylangar area to press for jobs.

The protestors who assembled in front of Koyla Bhavan at 10 am under the banner of BCCL ITI Apprentice Sangh shouted slogans against the BCCL management. Veteran Communist leader and former MP of Bankura Basudeb Acharia, who was present, supported their demand and criticized the unjust policies of the  coal company.

The agitators,  who were displaying banners and posterswith slogans against BCCL, later submitted a four- point charter of demands addressed to BCCL chairman and managing director P.M. Prasad.

Saroj Jha,  the general secretary of BCCL ITI apprentice sangh,  said, “Earlier,  ITI apprentices, after the completion of training at BCCL and other subsidiaries of Coal India,  were absorbed in the company. But that practice has been discontinued since the last three years.”

“Despite huge vacancies, apprentice trainees are not being provided jobs in BCCL and other subsidiaries of Coal India Limited while work is being carried out through private contractors who are exploiting workers by not even providing minimum salary  to skilled staff” said Pawan Kumar, president of BCCL ITI Apprentice Sangh. He added that they would be compelled to intensify their agitation if their demands weren't met.

Sunil Gupta, a joint secretary of BCCL ITI Apprentice Sangh, said, “While jobs are being provided to apprentice trainees in other sectors like railways, they are being deprived of opportunities despite vacancies. Instead private companies are engaged in coal excavation work on the pretext of lack of proper workforce before BCCL.”