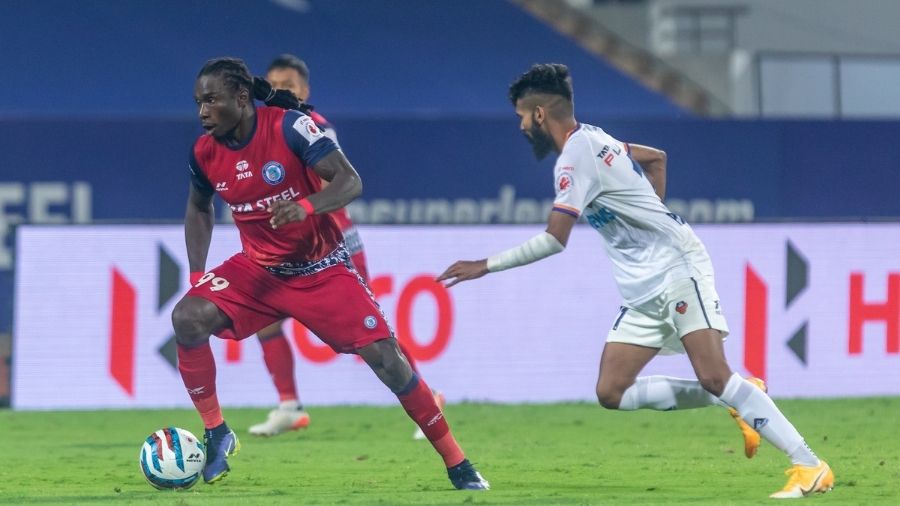 Nigerian forward Chima (49th minute) scored on his first outing for Jamshedpur FC after signing for them in the January transfer window.

FC Goa showed early form and narrowly missed the target when Ivan Gonzalez hit the underside of the crossbar with a header. The rebound fell to Edu Bedia whose low shot was brilliantly saved by TP Rehenesh. The Gaurs threw more subsequent attacks at the JFC defence but to no avail.

The first half was feisty, to say the least, which led to three yellow cards being handed out to Alex Lima, Anwar Ali and Chima respectively.

The second half started with JFC pushing for a goal and they got one through debutant Chukwu whose volley was too powerful for Naveen Kumar. The custodian got both hands on the ball but could not prevent it from slipping into the back of the net.

Jamshedpur FC head coach Owen Coyle heaped praise on Chima. " He (Chima) is a wonderful player, always has been. If you doubt him because he scored only two goals for SC East Bengal, I think you’ve got to look at the games. One doesn’t have to score goals (only) to contribute to a team and that’s what Daniel Chima does. He has the quality. The fact he scored the match-winning goal takes him to another level.”

“Chima is a champion, three times champion in Norway, at a very high level. He is a very good player and a good man. He has been very humble since he came into the group and his work rate, goal and performance on Friday was outstanding. So, for me, well done Chima,” the coach added.

On taking only one shot on target and overall performance, the Scotland-born Owen said, "I don’t think a lot about those stats. I know that we had numerous opportunities at different times. We scored a goal and have the clean-sheet, another thing which is important."

“FC Goa had some chances, but there is no doubt given the circumstances, we were fully deserving. We were tough defensively and we needed to have a little bit of composure with the final pass. That is understandable because the boys haven’t trained for 17 days, but the spirit, the desire and the will to win speaks for us,” he stated.

FC Goa will face an ambitious Odisha FC next at the Athletic Stadium on Tuesday while Jamshedpur FC awaits the challenge of an in-form Bengaluru FC on Saturday at the same venue.