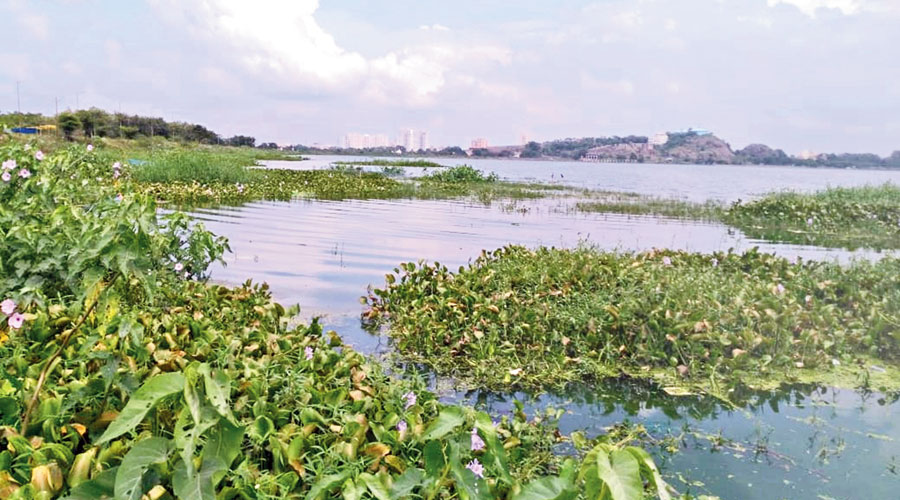 As many as 30 residents started an indefinite satyagraha on the birth anniversary of Mahatma Gandhi on Friday to protest against pollution and encroachment of Kanke dam, one of the main sources of water supply to Jharkhand’s capital Ranchi.

The residents, under the aegis of Kanke Dam Sanrakshan Samity (Kanke Dam Conservation Committee), claimed that they were forced to stage a satyagraha after failing to get any action on the ground level to either clear the waterbody of encroachment or measures to stop the flow of drainage water into the reservoir.

“We have been raising our voice against the encroachment of the water body since 2016-17 and have met successive drinking water and sanitation ministers (currently Chandra Prakash Choudhary), Ranchi MLA and erstwhile urban development minister C.P. Singh and even our local (Kanke) MLA Sammari Lal.

'However, we have only received verbal assurances but nothing has happened at the ground level. The residents of Pathragonda, Hatiagonda, Laxminagar, Sonso, Hesel and Kathalgonda (all residential areas near Kanke dam) had no option but to start an indefinite satyagraha near the dam.

“We would continue our satyagraha till the government gives us a deadline on starting the removal of encroachment and cleaning up the waterbody,” said Amritesh Pathak, a social activist spearheading the agitation.

Incidentally, Kanke dam, spread over nearly 450 acres, along with Getalsud and Hatia dam are among the three reservoirs that supply water to the state capital. Kanke dam has a water capacity of 20 feet. Catchment areas of the dam have been encroached with concrete structures at several places. This apart, effluents from factories and drain water from residential areas flow into the dam.

Amritesh Pathak (bearded in white striped T-shirt) with other residents at the indefinite satyagraha site near Kanke Dam in Ranchi on Friday.
Picture by Manob Chowdhury

“The dam which was built in 1954 has not been desilted even once. One can see algal growth due to the pollution which is affecting not only aquatic species and fish but also affecting water quality.

“Solid waste has reduced the water quantity and a stink emanates from the waterbody during summer. If urgent action is not carried out, we would witness a manmade water crisis right in front of us,” activist Pathak said.

Ranchi Municipal Corporation (RMC) chief executive officer Mukesh Kumar said that the removal of encroachment along the waterbody comes under the purview of the district administration.

Jharkhand drinking water, sanitation and water resources minister Mithilesh Thakur, however, assured that the government has already started the process of removal of encroachment along the Kanke dam.

“On the directive of the chief minister (Hemant Soren) around four months ago, a special committee set up by Ranchi district administration had issued notices to the encroachers to provide documents about their holdings. So far none of them have been able to produce any documents.

“We will soon start eviction of the encroachers. The RMC has already started preparing a proposal on setting up solid waste treatment plants (STPs) and putting up mesh on the drain outlets to prevent pollution of the waterbody,” said Thakur.