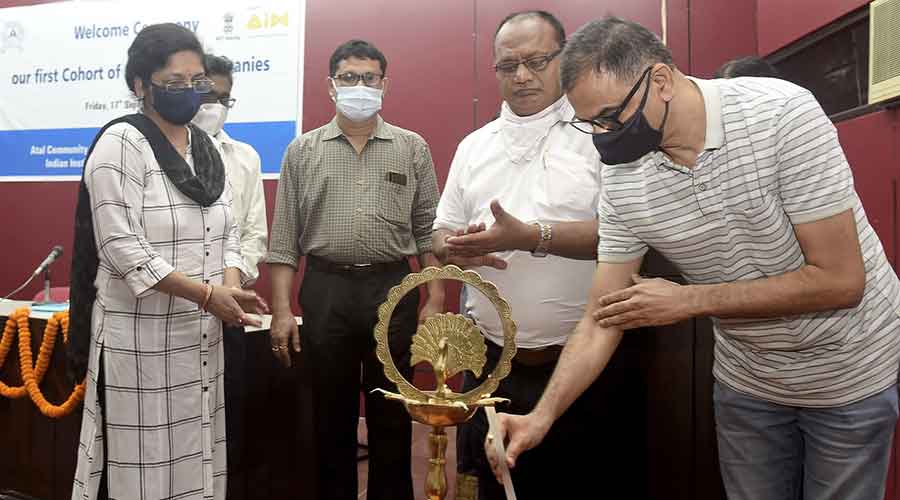 An introductory programme was held on Friday at IIT (ISM) intended at apprising the community at large and local budding entrepreneurs in particular about the  technological guidance, management and marketing strategy support and skill development being offered through its newly established Atal Community Innovation Centre.

Deputy Director of IIT (ISM) Professor Shlivahan who presided over the function briefed the gathering about the wide range of activities being conducted by the college to support the industry including the technological support to various small industries.

Amit Shukla, Chief Executive Officer of ACIC at IIT (ISM), also explained in details about the activities of the newly developed centre, including providing opportunity for everyone irrespective of their age to innovate, ideate and design impactful solution and also to support community learning by providing enabling infrastructure and linkages.

Explaining the deliberation during the programme Shukla said, “Ravi Nishhad, one of the entrepreneur of Bhuli area of Dhanbad engaged in Marigold flower cultivation apprised us about the problem with regard to mulching (removal of weeds) and also lesser profit and thus  based on our experience we suggested them to go for extraction of marigold flower products i.e processing which can be sold at higher rate to chemical or pharmaceutical industry.”

“We are considering taking suggestions from the chemistry department for exploring the possibility of extracting phytophenol from marigolds which can be sold at much higher rate than the flower,” said Shukla.

“We are simultaneously considering taking the help of the Mechanical Engineering department for developing a low cost equipment for addressing the mulching issue faced by Ravi Nishad and his business venture,” said Shukla.

“Another company, LAPLACE Games-Smartifying education engaged in designing innovative physical games for kids incubated by us is facing the problem of high cost wood and bamboo engraving machines which leads to high production cost and thus we are exploring ways of developing low cost equipment or make toys or will offer them machines by procuring them from other manufacturers engaged in production of low cost engraving machines,” said Shukla.

Regarding the aim of organising the programme, Shukla said, “We also organised the programme to dispel the myth that IIT (ISM) is only involved in cutting edge technology rather than conducting research for the benefit of common masses and to address the problem affecting their daily life,” said Shukla the centre will also make technology developed at the laboratory available for benefit of common masses.

Ravi Nishad of Bhuli who operates the company RPA while sharing his experience during the programme, “The programme was quite useful and we have been asked by the ACIC officials to come to centre on September 23 to discuss and explore the possibility of extracting useful products in the form of chemicals from the Marigold flowers.”